Three Indonesian Recreated ‘Tum PaasAaye’ And It Is Worth To Watch 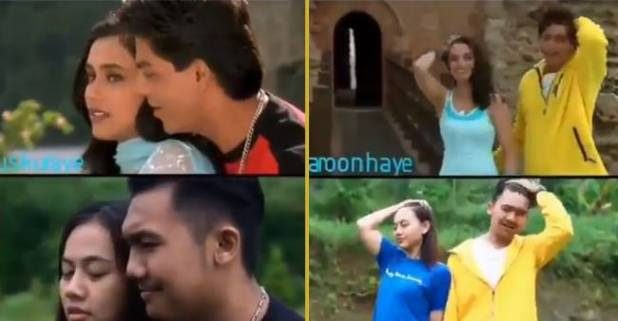 Bollywood films and the stars of Bollywood are famous not only in India but across the globe as well. And wherever you go, you will get to head one name always which is of King of Romance, Shah Rukh Khan. His films are immensely popular in abroad too. There are many romantic films release every year but the magic of films like Kuch Kuch Hota Hai and Kabhi Khushie Khabi Gham can’t be beaten. The fans of these films remember each and every scene of these films. One thing common in almost every classic romantic films of Bollywood and it is Shah Rukh Khan.

Lately, among the colossal fan base of Shah Rukh Khan, there are three Indonesians who have exhibited their love for the actor in the best possible way. These Indonesian fans recreated the blockbuster song Tum Paas Aaye from the film Kuch Kuch Hota Hai.

These three fans have matched the choreography and expression of the song and its bang on! They also dressed like Rahul (Shah Rukh), Tina (Rani Mukherji), and Anjali (Kajol)

The video of recreation of SRK’s song went viral instantly and has been garnered over a whopping 1.2 million views on Twitter. Twitter is flooded with the response on this video.

Bro who did this?

why am I cringing so hard? Why they be thinking life is a Bollywood movie? pic.twitter.com/nHL1H9hSNc

A twitter user wrote: If you’re not trying to re-enact scenes from kuch kuch hota hai like this with me then stop texting me bc my time is clearly being wasted.

Another Twitterati wrote: I so loved it..yes,life can be as fun as shown in Bollywood movies if you want to make it.

As per a tweet: This is amazing I think the world needs to see this.

Another tweet reads as: Wtf did I just see! Can I just pretend to never seen this!! I SAW IT THREE LOOPS!!! LMFAO!!

One more tweet says: Hahahahahha I have been singing this song ever since I saw this video — definitely the highlight of my day!

This describes the immense popularity of Bollywood on foreign land. Needless to say, Shah Rukh Khan is the most popular actor.