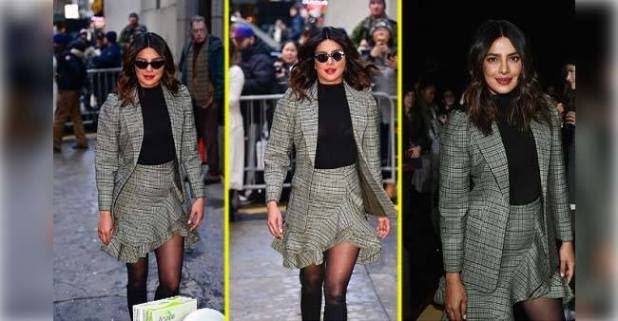 Priyanka Chopra and Nick Jonas’s wedding is still making rounds on social media and the latest buzz around the couple is just more than a rumor. She was recently snapped in a pose where her baby bump was seen clearly and since then it all started blazing that she is expecting for her first baby with husband Nick.

Moreover, Priyanka’s mother Madhu Chopra cleared the grapevine and said that there is absolutely no fact in the scoop. She said in her statement to a leading daily ” It was just a bad angle.” She further added, “The outfit was nice. She looked like that only in some pictures, the rest were fine. Blame it on the camera angle.” Take a look at the picture below:

Priyanka was garbed in a neck-deep during the promotions of her third Hollywood rom-com project, “Isn’t It Romantic” and she was tired because of her hectic schedule. “When I spoke to Priyanka on the phone, she told me that she was tired and hence, had a slumped posture. While Madhu spoke about what people were saying, and she simply said, ‘Mamma, give me a break’ ”

However, she was popped with so many questions at the premiere of Isn’t It Romantic in Los Angeles, if she is planning to have children with Nick in the near future, one media person asked her, another question that was asked to her was, if there was any pressure from her family regarding the same.

On the work front, Priyanka’s next project in India includes, “The sky is pink.” directed by Shonali Bose.