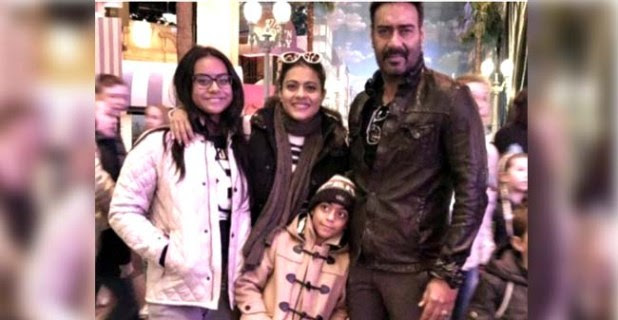 Singham star Ajay Devgn has done a wide range of movies in the Hindi film industry and has completed almost 27 years working in more than 100 movies. From National Awards to Filmfare, Ajay has won several accolades. Devgn has done various kinds of roles in cinema from a morose hero to the action star and even played comical roles leaving the viewers in splits. He is one beloved actor of Bollywood who enjoys a huge fan following much loved for his comedy films.

Soon, the Golmaal actor will be seen in Total Dhamaal, a mad adventure comedy about money which features an ensemble cast of Madhuri Dixit, Anil Kapoor, Riteish Deshmukh, Arshad Warsi, Javed Jaffrey, and Esha Gupta. This is the third film of the comedy genre, Dhamaal directed by Indra Kumar.

Ahead of the release of his upcoming film, Ajay Devgn revealed that his kids, Nysa and Yug enjoys watching his comedy films rather than action movies. His kids are excited about the flick. He also revealed that he doesn’t watch his own films more than once, although doesn’t mind watching a few funny scenes in his comedy films over again for a few minutes.

Speaking about the ‘Golmaal’ and ‘Dhamaal’ franchises, Ajay told PTI he doesn’t understand why such films are called ‘brainless’ as it takes intellect to create them.

“Comedy films are an addiction. You can watch them anytime anywhere. Talking of my own movies, I normally don’t watch them more than once. They may be brilliant, but I just don’t have the inclination to see them again. However, if it’s one of my comedy films, I stand around the television and definitely watch the funny scenes for at least five to seven minutes,” he told DNA.

“All of us need to laugh out loud. But that’s not my reason for doing comedies. I’m doing it because I enjoy the genre. Of course, I’m against doing just buffoonery. In fact, the other day someone close to me observed that I even do comedy seriously,” he added.