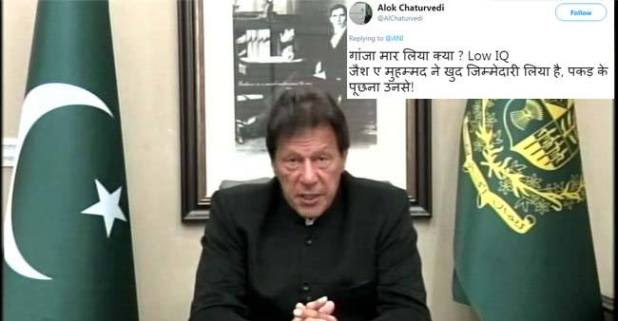 After four days of Pulwama Unlawful Happening in Jammu & Kashmir, Pakistan’s Prime Minister Imran Khan addressed the disgraceful incident and express his views on the same.

He stated, “My statement is for the Indian government. You (Indian govt) have blamed the Pakistan government without any evidence.”

“It is in our interest that nobody from our soil spreads violence. I want to tell Indian govt that we will take action if evidence is found against anyone from Pakistan. Pakistan ko isse kya faayda hai? Kyu Pakistan karega iss stage ke upar jab Pakistan stability ki taraf ja raha hai?”

Further adding he said, “If you (Indian govt) thinks you will attack us and we will not think of retaliating, we will retaliate. We all know starting a war is in the hands of humans, where it will lead us only God knows. This issue should be solved through dialogue.”.

Here’s the full video where he talked about the most disgraceful incident where Jaish-e Mohammad is found guilty. After which 4 people are taken down by our Indian Army.

Pak PM also clarified why he didn’t talk earlier about this as the due visit of Saudi Crown Prince Mohammad bin Salman’s visit in Pakistan.

When the statement made by Pak Pm went viral on the social media, netizens can’t keep themselves calm and they busted on the PM. Here are the tweets by the users:

India is a civilized and democratic society. We don’t attack anybody. We are not thugs out to loot the world.

India will hunt down terrorists whereever they are even if they are hiding at Banni Galla https://t.co/thiYSiSCCi

India will not spare you. Indian army will do the talking now. Ek Tha Pakistan would be our next film after URI .

On 17th February, Indian news anchor and author, Rajdeep Sardesai penned down an open letter to PM Imran Khan on his personal blog which he also shared on his Facebook official. Have a look at it:

Stay tuned for much more updates on Pulwama.