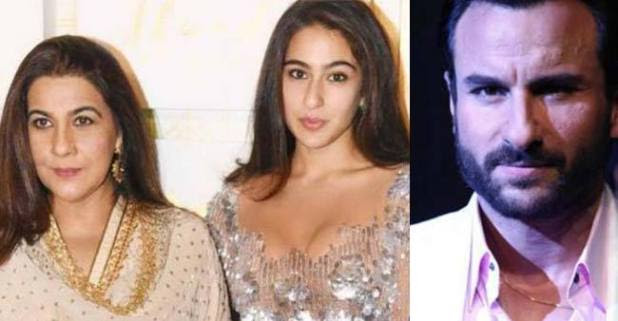 Sara Ali Khan is the most amazing newbie in Bollywood and we are truly drooling over the actress. Since her debut with Kedarnath, Sara indulges in numerous talk shows and we love the way how she is honest with her viewer, there is no parallel line to her character. From Sara’s appearance to her witty answers, she is one rising star who gave back to back two hits including Rohit Shetty’s Simmba opposite to Ranveer Singh.

Sara Ali Khan’s first made her appearance with her father Saif on Karan Johar’s Koffee With Karan 6 and that’s where the actress talked about her parents’ separation and told various aspects about her life.

Sara felt that her parents are a lot happier after their separation then they would have been if they stayed together.

Recently, when she made her debut on Famously Filmfare, Simmba star was asked about the same topic and Sara revealed her true feelings about Saif Ali Khan and Amrita Singh’s separation.

Take a look at what she said:

“It is not nice to live in a home where people are not happy. They are both, happy, bindaas and cool people, but individually. Together, they are not. And I think they too realized that. Fortunately, now I have two happy and secure homes to myself instead of one”.

Earlier, while talking in an interview with a leading film magazine, when Sara was asked if her parents have ever set any do’s and don’ts, she replied, “My parents insist that whether it’s being a good actor or a level-headed person, you need to make your own mistakes. So, short of preventing me from jumping off a building, my parents are okay with me taking my own call and making my own decisions.”

But Saif and Amrita always asked her to be honest and to be true to herself first. “The only dos and don’ts are things like don’t lie, don’t be dishonest. Dishonesty shows in your eyes and no make-up artist or DOP (director of photography) will be able to hide that. So, just be real,” the 23-year-old revealed.