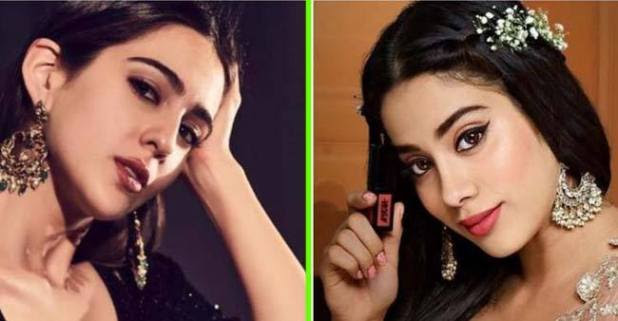 Even before their debut in Bollywood, Sara Ali Khan, and Janhvi Kapoor are being compared to each other. Janhvi debut with Shashank Khaitan’s Dhadak alongside Ishaan Khatter while Sara luckily got two back to back releases, Kedarnath and Simmba with Sushant Singh Rajput and Ranveer Singh respectively.

Every now and then both the stars have confessed that they do not feel any competition themselves. Anyone would confuse over Sara and Janhvi as they are the talk of the town and recently, a paparazzi person did the same by mistake when he called out Sara’s name seeing Janhvi Kapoor.

It happened when Janhvi was stepping out of her vanity van for Neha Dhupia’s talk show in which she will be accompanied by younger sister Khushi Kapoor. When she walked through the media, everyone calls out her name and one cameraperson accidentally called her Sara instead of Janhvi.

However, the sweet star didn’t get offended by it and said jokingly, “jaan boojh ke bola aapne (you said it on purpose).” And posed for the papz happily!

Earlier, Karan Johar who has worked with the two actresses said that it was unfair to compare the two stars. “Two girls, who are 21-22-years-old, if at this stage we start comparisons then it’s not fair. Both of them are wonderful, beautiful and they work very hard… Awards will never matter. The work they do, the love they get from people is every award,” he told PTI.

Right now, Janhvi is prepping for her upcoming film based on Gunjan Saxena biopic who is India’s first woman combat aviator and was tasked to evacuate the injured soldiers during the Kargil war of 1999. The first look of Janhvi went viral on the social media, have a look.

Apart from that she also grabbed Karan Johar’s Takht while doing her first movie whose shooting will be kickstarted next year. The multi-starrer film also features, Ranveer Singh, Alia Bhatt, Vicky Kaushal, Anil Kapoor, and Bhumi Pednekar. Takht will hit the screens in 2020.