The Google Assistant can now alert you of potential flight delays

If you’re an experienced frequent traveler, then you know that plenty of your delays are due to your plane being stuck somewhere else or because the weather at your local or arrival airport isn’t ideal (I’m looking at you, fogged in SFO in the morning). So you also know to check on your incoming flight, even when the airline tells you everything is fine, and the FAA’s airspace status pages.

But maybe you are not a frequent flier (be glad and rejoice) or don’t care to go through that process. In that case, you’ll be happy to hear that Google today announced that its Assistant will soon proactively notify you on your phone when its algorithms predict that your flight will be late. This feature is rolling out now and should be available to all users in the next few weeks. 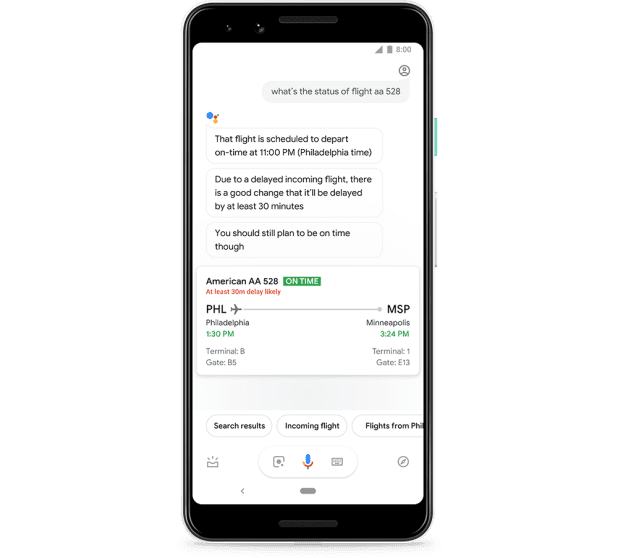 It’s worth noting that flight delay predictions from Google aren’t new. It introduced its first iteration of this in January. At the time, it didn’t proactively alert you of those delays, though. You first had to search for your flight. So unless you knew this feature existed, you probably never saw it in action.

Google says it mostly uses machine learning algorithms trained on historic flight data to predict delays. In addition, though, the company also clearly looks at some other information, given that it knows about delays of incoming flights, too.

The airlines aren’t kidding when they tell you that you should still be at the gate at the original time, by the way. If you’re flying through a hub, they could still swap in another plane, after all. If you’re me, though, instead of taking to the friendly skies, you will likely have to sit in Newark until well after midnight before the plane finally arrives. That’ll be right as your crew times out and with the next available reserve crew hours away. Chances are Google wouldn’t have been able to alert me of those delays, though, given that incompetence isn’t something it can predict yet, after all.