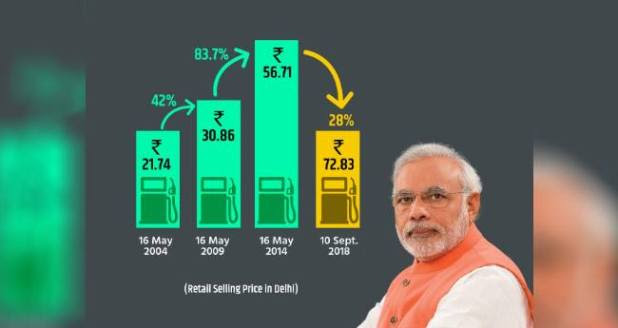 During the Congress’s Bharat Band on Monday, along with the capital, it happened in many states of the country where thousands came on streets. Delhi’s congressperson manifests in front of the petrol pumps in which they pointed out the rising prices of fuel where they used a bullock cark like a stage. They left no stone taunting the ruling government which is Bhartiya Janta Party- BJP.

BJP called out this Bharat Band as an unsuccessful protest by the Congress and other political parties where the ordinary citizens suffered and disturbed the routine of many. Meanwhile, BJP’s Amit Shah met Petroleum Minister Dharmendra for the increasing price of petrol.

Not only this, there’s an ongoing fight between Congress and BJP on the social media when BJP shared an infographic in which they tried to show that the fuel prices rose far more steeply during the United Progressive Alliance (UPA) years. But it created a blunder and BJP itself made a fun of themselves. Tweeting “Truth of hike in diesel prices!,” BJP invites the trollers, have a look at their tweet:

Till now, the petrol prices have gone over Rs.90.

Without wasting any time, Congress is quick, replying the BJP and trolling them for such a disastrous information. Official Twitter handle f Congress tweeted, “When you have to hide a 343% increase in taxes, but don’t know how. Even we couldn’t resist retweeting this”.

When you have to hide a 343% increase in taxes, but don’t know how.

Even we couldn’t resist retweeting this

Correcting the mistake done by BJP, Congress tweeted, “There! Fixed it for you @BJP4India#MehangiPadiModiSarkar”

Further adding, Congress posted their take on the rising price of fuels. Asking for the vote to come once again as a ruling government, they tweeted, “India, here’s why we are better at handling the economy and why you should vote us back to power. #MehangiPadiModisarkar#VoteForCongress”.

India, here’s why we are better at handling the economy and why you should vote us back to power. #MehangiPadiModisarkar#VoteForCongress pic.twitter.com/xaPm1tCKRc

During the time period of BJP’s government, the price of petrol in Delhi went up by 13 percent, said the Congress. Tell us your take on the same in the comment section!