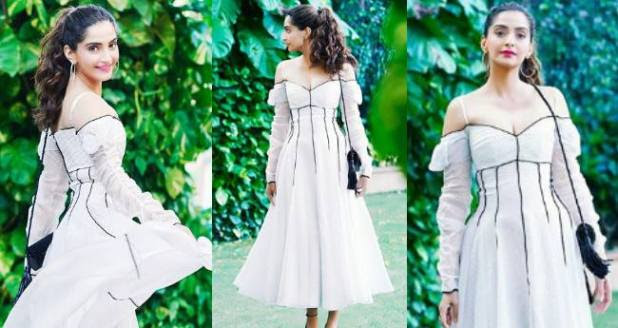 Since the day Sonam Kapoor came in the film industry, she is known for her fashion statements and given the title of a fashionista. Sonam has given fashion goals to many of us and inspires us to always try something new. From traditional attires to casual clothes, the airport looks to runways, she pulled out every outfit like a pro. She knows how to keep her fans adoring her every time she goes out. No doubt, even her haters adore her style.

And in the journey of her becoming a fashionista, her producer and celebrity stylist sister Rhea Kapoor is always there. These two sisters are ruling out. You may wonder why we are admiring Sonam this much, well you will understand after watching her latest pictures shared by Rhea Kapoor which tells us about the modern day princess.

This time the actress made us drool over her white Emilia Wickstead dress and she is looking absolutely stunning in a long frock dress who believes that comfort is more important than style and she herself always follow this rule. Completing her looks with Manolo Blahnik black pumps and hoop earrings from Jet Gems, the actress carried the look with utter hauteur.

Have a look at the pictures wherein one picture Sonam twirl out perfectly and in other two, she was looking royal:

Tell us your take on the same, while we love her latest look in white looking all innocent!

For the uninitiated, Emilia Wickstead is a fashion designer from New Zealand, based in London, England. In 2014, she had won the Red Carpet Designer of the Year Award at the Elle Style Awards, and her clients include Samantha Cameron and the Duchess of Cambridge.

Sonam has a few projects in her kitty and she is busy shooting for the same. She will be next seen in Ek Ladki Ko Dekha Toh Aisa Laga which is directed by Shelly Chopra Dhar under the production of Vinod Chopra Films. This film will mark the father-daughter duo debut alongside Juhi Chawla and Rajkummar Rao. Juhi is also making a comeback with this film and it is the most awaited movie for her charming performancce once again.

Also, Sonam will soon be seen in Abhishek Sharma’s The Zoya Factor which is based on a novel written Anuja Chauhan with the same name. Dalquer Salmaan has been cast alongside the graceful actress Sonam Kapoor.