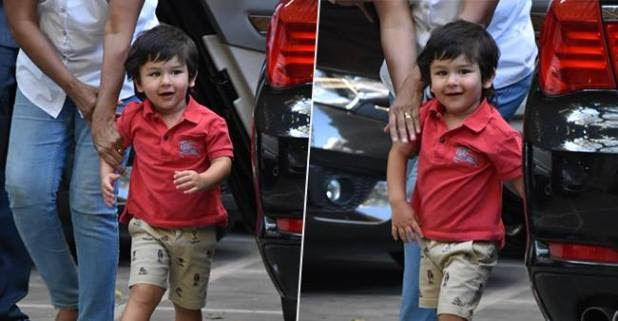 Taimur Ali Khan, the son of Saif Ali Khan and Kareena Kapoor once again spotted in the public. After completing his vacation in Mumbai for about a week, Taimur Ali Khan recently returned back to Mumbai. Now, the celebs have returned back to their routine work after spending the best time together. In Bandra, Mumbai, Taimur was spotted and captured alongside his nanny.

The kid looked truly cute and adorable in a red T-shirt and short. Here’s a video of the kid that went viral across the internet. From the video, we can witness Taimur getting down from a car alongside his nanny. Soon, the shutterbugs started clicking the pictures of the kid. Taimur looked quite excited after seeing the paparazzi.

Soon, the kid turned out to become camera-friendly and he is truly responsive to the shutterbugs whenever they call his name. Whenever Saif and Kareena come out alongside their son, they have immense concern over their kid. During the chat show on Koffee with Karan, Kareena said that she couldn’t resist him from moving out. However, she can at least request the shutterbugs not to follow the kid everywhere he makes his appearance.

After looking at the pictures from today, we can see Taimur’s expressions and he is completely relishing the attention of paparazzi on him. Check out the cute and adorable pictures of Taimur Ali Khan given below. In the meantime, there were few reports from the previous week that the fellow human beings next to Saif’s house had an issue with the cameramen gathering near their house to capture the pictures of Taimur.