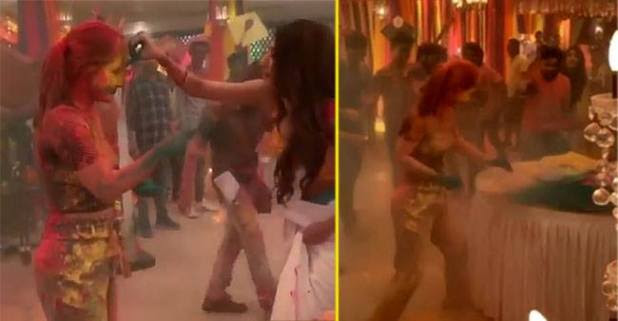 Popular TV drama Kasautii Zindagii Kay actresses Hina Khan and Erica Fernandes are said to be in rivalry ever since Hina entered the show.  According to the rumor mills the lead actresses of the show doesn’t share good equation with each other.  However all the rumors gone off air as a video from the sets of the Kasautii Zindagii Kay went on air.  The video shows Erica and Hina playing Holi on the sets of KZK.

Up until now many rumors did rounds about a cold war between Erica and Hina.  However Hina long ago ruled out all the rumours saying that there is no truth to these rumours, but Erica maintained her silence about it.  In an interview to Bombay Times, Hina told “I have been inundated with calls regarding my alleged issues with Erica, but I chose to not respond, as I find these rumours stupid. It’s only been a few months since I have started shooting for this show, and every relationship grows organically. I can’t impose myself on someone nor can the other person do it.”

Hina said she had a great rapport with Erica

She also said, “Erica is a very sweet girl. In fact, everyone in the team is nice. Sometimes, you connect with people instantly, or you take time. There are also times when two people, who are good individually, fail to gel with each other. Shaadiyaan toot jaati hain. The other actors share a great rapport with each other, because they have been shooting together since six months. They have a lot of memories; I can understand that. Erica and I talk a lot, but I would not say that we are friends. May be, with time we would become friends, but I don’t see that happening because I am taking a break from the show in the next month-and-a-half.”