Dipa Karmakar: The first female gymnast who made India proud at Commonwealth 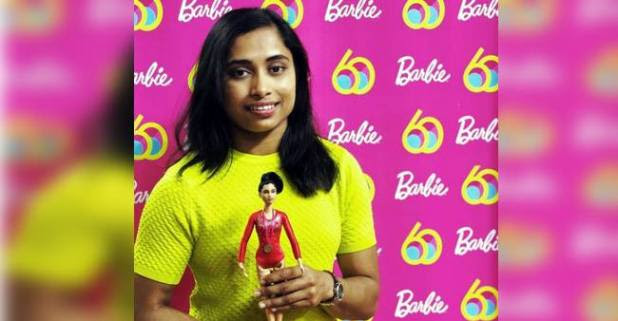 The renowned and popular gymnast Dipa Karmakar became the first Indian female gymnast who won the medal at the Commonwealth Games. At the Commonwealth Games in Glasgow, Karmakar made us proud with a medal in her kitty. She won the bronze medal and to appreciate her contribution to our nation, the 60th anniversary of Barbie launched a Dipa Karmakar inspired Barbie and we are in awe to see the barbie.

On the professional front, Dipa Karmakar became the iconic global brand for their ‘role model’ campaign to mark the 60th anniversary of Barbie.
‘Dipa Karmakar’ Barbie doll dons a red full-sleeve leotard and a bronze medal. The 25-year-old Indian gymnast has won 77 medals including 67 gold in state, national and international championships and in July 2018, Karmakar became the first Indian gymnast to win a gold medal at a global event, when she finished first in the vault event of the FIG Artistic Gymnastics World Challenge Cup at Mersin, Turkey.

Barbie has always shown girls that they can be anything!! On the occasion of her 60th anniversary, I am honoured to be selected as a Barbie Role Model to help inspire the next generation of girls!#Barbie60 #YouCanBeAnything pic.twitter.com/6cnAWtLvDs

Dipa on her tweet wrote, ” Barbie has always shown girls that they can be anything. On the occasion of her 60th anniversary, I am honored to be selected as a Barbie Role Model to help inspire the next generation of girls”

In a statement given by the company which could be read as “Dipa created history by becoming India’s first female gymnast to qualify for the final of the vault event at the Olympics. She missed out on bronze by a narrow margin, finishing fourth in the event. Dipa is one of only five women who has successfully landed the Produnova or handspring double front, the most difficult vault currently performed in women’s gymnastics. She has defied all odds and inspired a generation of young girls to take up the sport of gymnastics.”

We can achieve anything in life and so does Dipa inspires us to do. For more scoops stay tuned