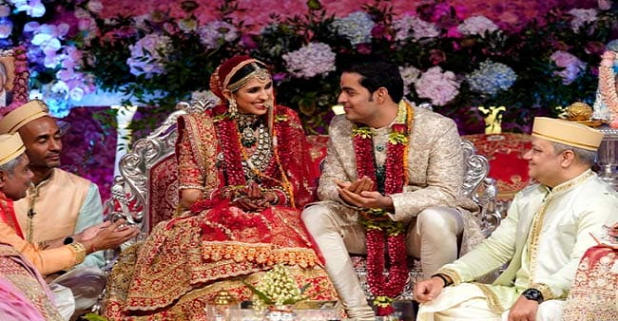 Yesterday, the grand and lavish wedding of Akash Ambani and Shloka Mehta took place and with God’s favor and blessings the couple is head over heels after tying knots. Akash and Shloka got engaged in the past year and finally tied the knot yesterday in the presence of their family and relatives. The pictures of their wedding are surfacing in all the social media platforms. Take a look at the photos floating on the internet:

The couple tied knots at India’s largest corporate house’s newly-constructed center in the Bandra Kurla Complex. The venue is near the distance of the school run by Ambani’s family. It was the same school where Akash and Shloka studied together. Blossomed from school days their bond has finally turned into nuptial relation.

To add more glamour to the wedding, the attendees at the function included VIP from various fields. From the Bollywood world celebrities like Amitabh Bachchan, Aishwarya Rai Bachchan along with husband Abhishek Bachchan and daughter Aradhya marked their presence.  Rajinikanth, Aamir Khan, Priyanka Chopra

Earlier the family celebrated the pre-wedding festivities along with big celebs from the glamorous world. The Swiss town had almost 500 guests as the festivities started from 23rd February to 25th. Ranbir Kapoor, Karan Johar, Alia Bhatt graced the bash with their dynamic appearances.

Tonight the Ambanis and the Mehtas will be hosting a wedding bash of Akash and Shloka in Mumbai and on 11th of March another reception for the newlyweds will be hosted in the city.