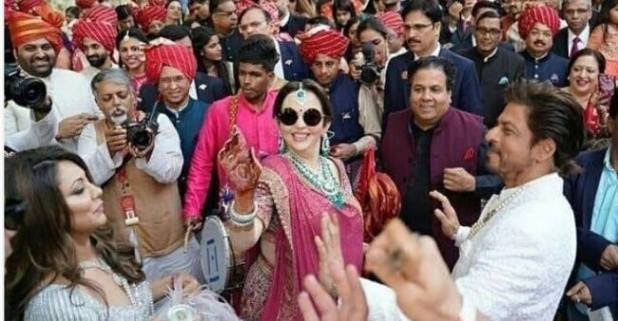 The grandeur wedding bash of Akash Ambani and Shloka Mehta has been the talk of the town, every next minute new pictures from the wedding diaries are emerging on the internet. From Shloka Mehta’s dance video on Mehandi ceremony to the Baraati dance of various celebrities, we are drooling on every picture from the wedding. Among the Bollywood celebrities, Shah Rukh Khan, Ranbir Kapoor and Karan Johar, who were from the Baraatis side at the Ambani-Mehta wedding, had a whale of the time dancing on the beats of Baraati dance. Shah Rukh donned in white Manish Malhotra sherwaani, is shaking boots with Nita Ambani. Take a glimpse of the picture here…

Shah Rukh along with wife Gauri marked their presence in the wedding ceremony. The function was attended by many celebrities from the filmi Duniya and other fields. And there was no ending to the guest list.

Yesterday, the adorable couple tied nuptial knots on the 9th of March. Near to the Ambani’s school which is run by Ambani’s. Akash and Shloka have studied together in the same school. Right from their school days, they had a good friendship which finally turned into nuptial relation on 9th of March.

Earlier the family celebrated the pre-wedding festivities along with big celebs from the glamorous world. The Swiss town had almost 500 guests as the festivities started from 23rd February to 25th. Ranbir Kapoor, Karan Johar, Alia Bhatt graced the bash with their dynamic appearances along with their attendance in the wedding night too.

Well, today both the families Ambanis and the Mehtas will be hosting a wedding bash of Akash and Shloka in Mumbai and on 11th of March another reception for the newlyweds will be hosted in the city.

Don’t miss any updates on the same, share your comments with us.