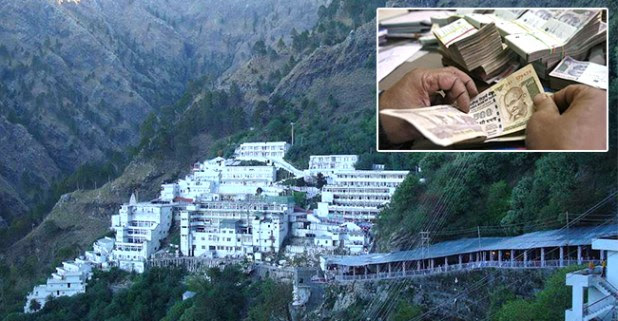 When Prime Minister of India, Narendra Modi demonetized the currency of Rs 500 and 1000, devotees went to the shrine of Shri Mata Vaishno Devi in Reasi district of Jammu and Kashmir and offered Rs 40 lakh in demonetized currency notes. This happened in the last two years, a top official reported.

“There is no dip in the offerings. Rather the trend is encouraging but yes some devotees still offer demonetized currency. This figure of such demonetized currency has reached Rs 40 lakh,” Shri Mata Vaishno Devi Shrine Board’s (SMVDSB’s) chief executive officer Simrandeep Singh said while speaking to the Hindustan Times.

The board manages and regulates the pilgrimage.

“The RBI has refused to accept as these currency notes are no more legal and have no relevance. Yes, they are trash for us. We will dispose of them in an appropriate manner,” he said.

Even after the Demonetisation and goods and service tax (GST), it didn’t stop the pilgrims from visiting the cave shrine which the second richest in India after Andhra Pradesh’s Tirumala Tirupati Devasthanam.

“What GST has to do with it? Demonetisation has also no impact on the offerings at the cave shrine,” he said.

As soon as the Prime Minister’s declaration, the holy place barricade had set a point of swipe machines to encourage pioneers to make cashless installments through charge and Mastercards.

The board has also issued pamphlets which were shown at various areas along the track and in addition at Niharika, Ardhkuwari, Bhawan and at every accommodation and different units, which says do not to put old cash notes in the gift boxes.