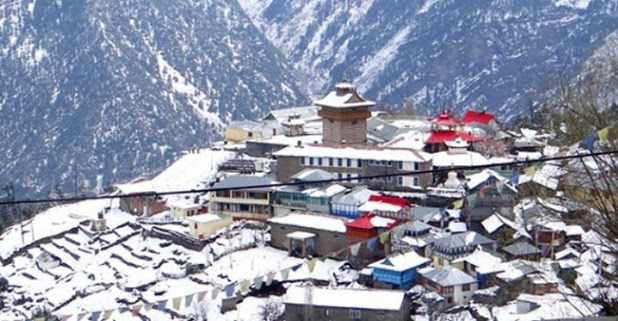 Manali is experiencing snowfall for the second day in a row. From past couple of days, the temperature across the town has been dipping. It also resulted in snowfall which has left the residents and tourists in excitement and happiness. On Sunday, the cold conditions in Himachal Pradesh got intensified and the temperatures remained low across the state.

The picturesque town of Manali in Kullu district received a fair amount of snow today, India Meteorological Department said, adding that the town received 9 cm of snowfall from 5.30 pm on Saturday to 8.30 am on Sunday.

According to PTI, the cold waves got increased on Saturday in Himachal Pradesh with several high altitude regions in Kullu, Chamba, Kinnaur and Liti districts receiving fresh snowfall and rain.

He further told that the minimum temperature in Kapa was -2 degree Celsius, whereas it was -1.1 degree in Dalhousie and -0.8 degrees Celsius in Kufri from 5:30 pm Friday to 8:39 pm Saturday. An official said, “Manali and the hills overlooking it experienced moderate snow. There are chances of more snow till January 9.”

Meanwhile, the lower hills in Himachal Pradesh like Dharamsala, Palampur, Solan, Nahan, Bilaspur, Una, Hamirpur, and Mandi received heavy rainfall which resulted in the mercury going down. The highest rain of 21.88 mm is recorded at Dharamsala in the state. Vikram Thakur told the news agency, “We are hopeful of getting more tourists in Manali with this spell of snow.”

The sight has become so beautiful that you can’t stop yourself from visiting it. Despite bone-chilling cold you tourists can’t stop themselves from taking a look to the view.