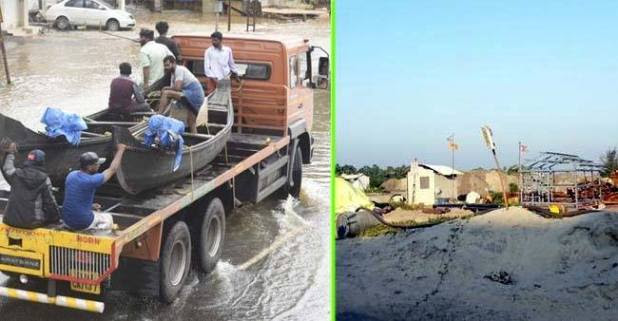 Kerala, the state which faced huge trouble during previous year because of the natural disaster was enough to shake off the state. The flood made a loss of many lives and victims. After such a huge misplacement, a village named Alappad, which is one of the coastal villages in Kollam is facing another pressure of mining.

The activities of mining in the village have reduced the overall area of the town, Alappad had an area of 89.5 square kilometers which has now been reduced to only 8 kilometers by 2019.

It all started long back from 1968 when the two public sector companies, Indian rare earth, and Kerala Minerals and Metals Limited started mining the beach sand in the region, but now the companies have almost wiped off the entire village area. The huge deposit of uranium-rich black sand was found on the beach after the 2004 Tsunami in the state. Now such a condition has arrived that if you stand at one side of the land, the other side is visible.

One of the local residents said, “The companies claim that they have mining permission till 2020. But, at this scale, by then, there will be no Alappad left.”

While an anonymous IRE official told to the PTI, “Since ours being a public sector company with strategic importance, there are several monitoring agencies and both the state and the central governments are aware of processes followed by us.”

He added, “Being a public sector undertaking, the IRE must do the mining in a responsible manner. They should engage in mining by protecting the shore. This is what the people want and the government stands by the people.”

Even the state’s fisheries minister, J Mercykutty Amma said, being a public sector company, they should responsible for mining without affecting the area.

Stay tuned for more scoops around the world.