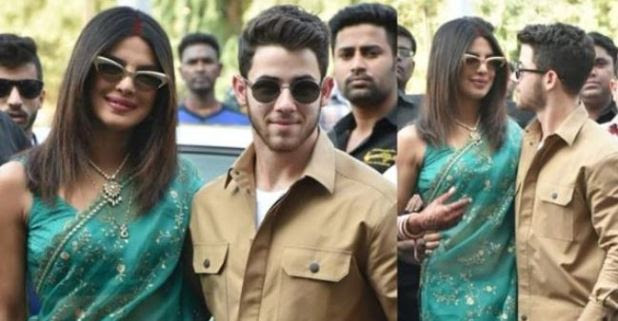 After their larger-than-life wedding which took place at Jodhpur, Nick Jonas and Priyanka Chopra have left their wedding venue. The newlyweds were spotted at the Jodhpur airport and media went berserk.

The couple looked elated and greet paparazzi. While Priyanka greeted media by doing Namastey, Nick too followed her beloved wife and greeted media in the same way.

Take a look at the pictures…

Along with the newlyweds, paparazzi also captured Priyanka’s in-laws Joe Jonas and Sophie Turner, Kevin Jonas and Nick’s mother and father were spotted at the airport.

The couple is reportedly now all set to host two grand receptions one Delhi and other in Mumbai for their industry pals.

Priyanka and Nick’s wedding festivities kick-started from 30th November and ended yesterday. It was a three-day gala affair, however, it was a complete intimate affair as no media was allowed to capture the pictures. Tight security arrangments were made to ensure no pictures were leaked from the wedding celebrations.

The couple on Saturday and Sunday shared few pictures from the Mehendi and Sangeet ceremony on their respective social media accounts.

Take a look at them here…

The pictures went viral on social media as soon as they shared and got millions of likes and comments within a few minutes.

Well, we are still awaiting the pictures from Nick’s and Priyanka’s wedding.

Published by Harmisha Chauhan on 03 Dec 2018