Knickers, the Giant Cow is the New Trending Sensation on the Internet 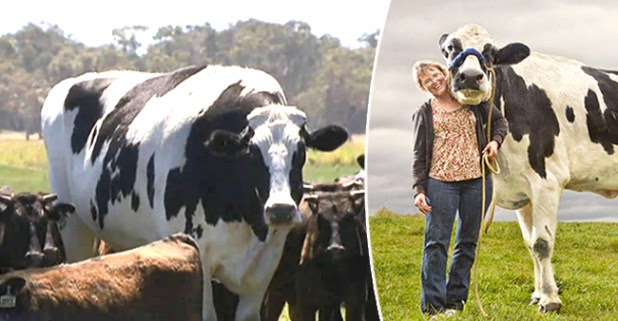 The latest trending sensation on the internet is a cow. Yes, you heard it right. Ecee since photos of the giant Holstein Cow from Australia. Knickers surfaces on the internet, everyone is just loving it. The cow is nearly two-meter tall, 1400kg. The cow has grown so much that he stands out like a sore thumb among his herd and has become a viral online celebrity.

People: “If only there were some good news sometimes.”
The internet: “Here’s a really big cow.”
People: “Close enough for now.”

There are several reasons why animals can grow too much larger sizes than we consider normal. The body can also produce an excess of growth hormone because of an abnormality in the pituitary gland.

According to Smithsonian Daren M. Sheffield, production records specialist at the Holstein Association USA, says that if a Holstein steer is allowed to live longer, it can grow even larger than bulls due to hormone differences.

Another reason for knickers for appearing taller is that he is surrounded with Wagyu, a different cattle breed that gets as tall as 4 feet 7 inches. Some of the reposts suggest that the owner Mr. Pearson has grown a fondness for the animal, much like the other animals on the farm. The steer is the patriarch of his herd, often helping the smaller cows.

George Pearson thinks that his beast stands out because the vast majority of steers are simply never allowed to reach true beefcake status. He said, “They probably don’t have the opportunity to grow to their full potential. There could be other animals that could grow to this size but didn’t a get a chance.”

Meanwhile, the internet is fascinated by a giant cow. According to the reposts, Holstein Steers are actually expected to grow to tremendous sizes as they mature. It means that Knickers is actually just a regular Holstein Friesian breed. Who got naturally lucky and not genetically freaky.