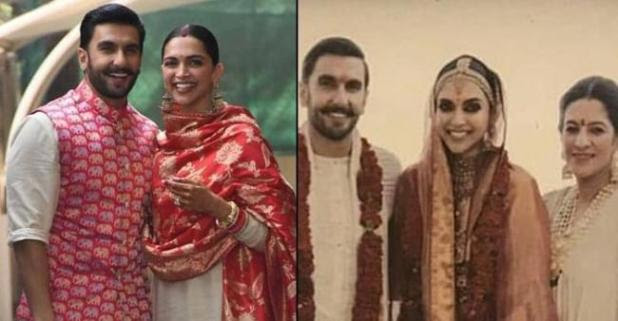 Ranveer Singh and Deepika Padukone had a lined up of interviews after their marriage as this is the time when every media channel can ask them about the phase when they were dating and also after marriage how things have changed for them in every aspect of their lives.

While Ranveer in an interview with Mid-Day has shared that his love, Deepika has given him the best wedding and an even better marriage. The Simmba actor said, “I couldn’t have asked for more. I am the happiest I have ever been. Everything that has happened this year is beyond my imagination. Accolades and acclaim for Padmaavat were unprecedented. I couldn’t have dreamed the bliss life handed out to me. My marriage — Deepika gave me a dream wedding and an even better marriage. She had a vision for everything and worked meticulously on every detail. She gave me a memorable wedding that will be in my heart forever. I feel safe, secure and loved. Something has changed inside me; I am living the dream.”

Deepika Padukone, on the other hand, has revealed a lot talking to Filmfare magazine when being asked about her marriage, and how things have changed, post that, Deepika said, “I’m a lot more grounded. I feel secure, I feel protected. When you’re in a relationship, there’s still a lot of nerves, you’re still unsure, no matter how long you’ve been dating. I guess, the terms boyfriend and girlfriend sound frivolous. Somewhere, it doesn’t carry that weight as marriage does. Today when we look at each other, there’s a sense of responsibility.”

The actress further added, “The way Ranveer held my hand on the day we got married, November 14 was different from the way he used to hold it earlier. Or maybe it was just a switch in my head. There’s a sense of responsibility, which I can’t explain. Now everything we do is ‘us’. Not to say that in marriage you should forget your individuality and independence. But it’s also nice to know that today I share a home with someone. Even if he’s busy promoting his film, he comes back late at night. Even if he walks in at 4 am, he’s coming home. When you’re in a relationship it’s different. We didn’t want to live together and then see if we wanted to marry each other or not. We’re both traditional in that sense. Of course, as boyfriend and girlfriend you stay over, you go for holidays together but we used to come back and go to our own homes. We were clear that we’d start living together after marriage and figure life as we go along. Or else where’s the beauty in the discovery? So now we’re figuring things out. Like I’m figuring out his routine. I call him in the evening to check how his day is going and what time he’s coming home, what he will have for dinner.”

Deepika called it magical when she tied a knot with her love and living with him after marriage. She retorted, “It’s beautiful living together. I’m sure cynics will say you’ve just gotten married to him, wait for 15 years or 25 years. We’ll figure it out then. For now, it’s the best feeling in the world. I looked forward to living together because I moved out of home at a young age to start working. A lot of my friends used to say we can’t wait to get out of our house. I was the opposite. I got out young. I craved for my family. When we were dating, it was about spending time with his family or going to Bangalore to be with my parents. I’d crave that quality time where you wake up in the morning and have someone to talk to while you’re having breakfast. For the last 15 years, I was alone.”

She also revealed that at first she was hesitated to commit Ranveer as her past relationship have left sour experience and added, “It was not about him. It was about whether I was ready to commit to a relationship. Because I’d been in several relationships before and many times my trust was broken. When I met Ranveer, I was exhausted. I had been constantly in and out of relationships. I just wanted to be alone for some time. I’ve never casually dated anyone. I’ve been in relationships since I was13. (Grins) Now that I’m married I can say this. Whether it was one year, two years or three years, they were always proper relationships. It was always if you like someone you give it your hundred per cent.”

Explaining further, Deepika revealed that her relationship with Ranveer was open. She quipped, “So when this relationship, which I was in ended in 2012, I was like I’m done. I wanted to try out this concept of casual dating. I just did not want to be answerable to anyone. When Ranveer and I met in 2012, I told him I realise there’s a connection between us. I really like you but I want to keep it open. I don’t want to commit. If I get attracted to different people I’m going to do my thing. But nothing happened. I couldn’t get myself to do any of that. At the same time, I did not emotionally invest in this relationship. But now when I look back, six months into it I was pretty much emotionally invested in us. After that, it was when do we get married? I was never unsure about him. Of course, in a six-year-long relationship, you go through your ups and downs but we never broke up. There was no major fight or saying let’s take time off and figure this out. We’ve fought; we’ve had our ups and downs. But we stuck through all of that. We got engaged four years ago.”

Remarking on the way that she had turned out to be negative because of her past connections, and questioned each certified activity of the other individual, Deepika said, “Yes, it did. But marriage has changed it. When you give your 100 per cent to a relationship and your heart is broken not once but repeatedly, it scars you for life. It has a negative impact on your later relationships. It was difficult for Ranveer, who had to deal with it. The only reason we have come out of it successfully is that of him. I didn’t give up on the idea of love but I had my insecurities. You start doubting even a genuine action of the other person. Because you’re so scared it’s going to happen to you again. It has taken a lot of effort on his part and a lot of counselling sessions on my part to understand that every person and every relationship is different. I had to make Ranveer understand that I was reacting in that manner because of certain incidents that happened in my life. He was extremely patient with me through all my doubts, my insecurities. He constantly reassured me.”

She also Revealed the one memory from her wedding that will stay with her forever and shared, “There are so many memorable moments. My mother doing the Kanyadaan. Also that moment on November 13, when I was getting my Mehendi done and the sun came out. Ranveer and I have a connection with the sun, we love the sun. Everything was perfect. Not one bag got misplaced, no one missed a flight, it was all in place. On November 15, after the Anand Karaj ceremony was over, there was one boat to take Ranveer and me back to the hotel from the venue. The sun was setting… it was the first time after our marriage that we were alone. We listened to our favourite song on full volume and literally rode into the sunset.”

32 years old actress believes in Individuality that she will never lose in this marriage. She said, “Individuality. Had you asked me this before I got married or if I was with someone else, I’d have probably said honesty or infidelity. But it doesn’t come up anymore. If one can find a beautiful balance between understanding and respecting one another and at the same time being who you are, it’ll be beautiful. That’s what this journey will be.”

She also shared how her equation with Ranveer’s family is, and said, “It’s interesting. For his father, I’m like a daughter. But for his mom, I’m like a friend, a beti also. I can tell her my deepest darkest secrets. It’s stupid to explain because I can’t even put it into words. There’s nothing that I have to keep from them. They are like my parents now, they are my family. Uncle is emotional, he breaks down easily. Mum’s an absolute chiller. Like she will party with the youngsters till eight in the morning.”

Signing off Deepika revealed the best thing that Ranveer has ever told her. She opened up and said, “He says a lot of things. Honestly, he’s generous with words. That’s one of the things that made me realise why I love him. Some years ago, when I was making more money than him, he was okay with it. It was evident not only in what he told me, even in his actions. Also, the fact that he has never held back what he thinks of me. Recently, he said in the Filmfare interview that I keep him grounded, that I keep him rooted. That’s a nice thing to say and know.”

We are in love with this couple to infinity!