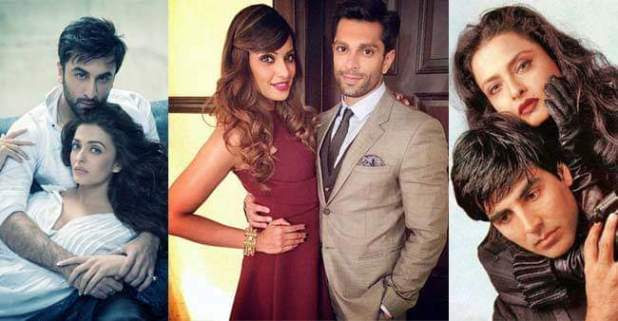 Bollywood perfectly influences us to dream big and have unrealistic expectations from our love life. Earlier, younger actresses were cast, opposite popular actors. And now actors are seen romancing older women on screen. Check out the list of stars who played romantic on screens:

Bipasha is three years older than Karan. Both of them were seen together in their movie Alone. The film was directed by Bhushan Patel. The movie is a horror film as it deals with relationship and turmoils of a married couple.

Ranbir is 33 while Aishwarya Rai Bachchan is 42. The movie also featured Anushka Sharma and Fawad Khan. The film tells the story of Ayan (Ranbir), who is in love with Alizeh (Anushka) and continues to love her even when she marries her boyfriend. Though Ayan tries to find solace in poet Saba (Aishwarya) for some time, his heart still beats for Alizeh.

The 36-year-old Nargis was cast opposite 29-years-old Varun in Main Tera Hero. It is a 2014 India romantic action comedy film which was directed by Dravid Dhawan.

They worked together in Khiladiyon Ka Khiladi which came in 1996. With a swooping age gap of 13 years, they romanced on screens. The story revolves around the game of survival in the world.

In 1996 Shah Rukh Khan and Sridevi romanced in Army. The actress is 3 years older than the actor. The movie was directed by Raam Shetty and was a hit at the box office.

Well, some of the jodis were a hit and we would definitely like to see more such pairs onscreen in the future.