Birthday Special: Dilip Kumar And Saira Banu 52 Years Of Marriage Is Beyond Perfect 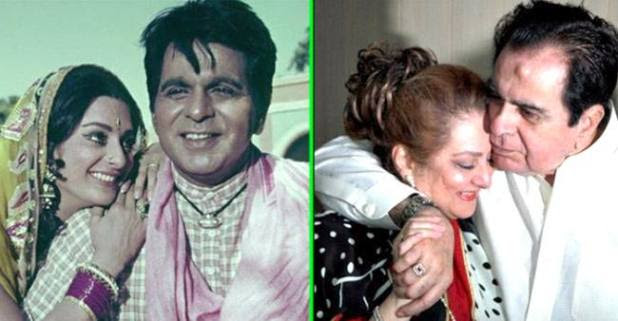 Bollywood’s veteran actor, Dilip Kumar turned a year older today. The 96-years-old actor also known for his epic saga, Ek Duuje Ke Liye and Mughal-e-Azam married his love Saira Banu who is also an actress and they are truly an evergreen couple. Their 52 years of marriage can be remembered for lifelong devotion towards their partners. Where Bollywood couple doesn’t last long, these lovebirds stayed with each other through the thick and thin of the life.

Message frm Saira Banu: My Kohinoor, my sahab, the man of my dreams, my Yusuf jaan and I can’t thank enough- the millions of well-wishers, friends and family for your beautiful messages, calls and greetings on our 52 years of marriage today, Attaching a personal fav. photo -SBK pic.twitter.com/1mViBY3tN4

It is well known, Dilip Sahab is 22 years older than Banu and their love story has overcome this difference.

For me the true meaning of the word ‘Life Partner’ has only been best represented and described by the years of togetherness shared between Dilip Kumar Saab and Saira Bano Jee❤️❤️ @TheDilipKumar @faisalMouthshut #dilipkumar #sairabano #saab #bestcouples #bollywoodlegend pic.twitter.com/bhjkqpWNpb

Dilip Sahab and Banu’s love story is all sort of fairytale. The 74 years old actress has confessed that she was all in love with Dilip Kumar at the age of 12. In a tabloid interview, Saira Banu said, “I was not just another girl smitten by Dilip Kumar. For me, it was no castle in the air because I had given my dream the strong foundation of faith- faith in myself and faith in God.”

In 1960, when Dilip Kumar’s super hit tragic romance Mughal-e-Azam got released at Mumbai’s famous Maratha Mandir movie hall, Saira Banu was only 16 at that time and went to the theatre only to see her favorite hero in person. However, Dilip Sahab was not able to attend the premiere.

He was the first one to debunk the myth that actors on screen hardly carry any insight into human behaviour.#HappyBirthdayDilipKumar on @TheQuinthttps://t.co/HcZRuFxuAA

Finally, when Saira got the first glimpse of the 60’s superstar in person, she remembers that very first moment fondly and as clearly as ever. Remembering that first encounter, she said in an interview, “When he smiled at me and remarked that I was a pretty girl, I could feel my whole being taking wing and flying rapturously. I knew somewhere deep within me that I was going to be his wife.”

Simple yet mesmerizing, Saira also went on to become an actress and her life was like just any famous celebrity, surrounded by a number of controversies and love affair. Her charm and grace won the hearts of many which made her the leading actress of that time.

At the Nikah of Nida Farooqui (but she is not in this photo). -SBK pic.twitter.com/W4lBODNAYV

She also fell in love with the well-known star of the 70s, the much-married Rajendra Kumar. This love affair hit so many controversies but when Saira mother and former actress of the 60s Naseem Banu intervened. Nassem went on to become the cupid between Saira and Dilip and got them closer. Dilip Sahab proposed the lady with the blessing of their respective families and without any second thought, Banu agreed instantly.

The veteran couple got married in 1966 with the age gap of 22 years. Saira was 22 and Dilip Sahab was 44 when they got hitched.

And when a couple got married with such a huge age gap, people can’t digest it and started saying that this marriage would soon fall apart. Despite this fact, the couple becomes the milestone for many when it comes to marriage with their invincible and indomitable love.

After marriage, Saira didn’t stop working but she became selective when choosing the roles. Later by 1976, she left the film industry and adapted herself in the role of being a wife and homemaker.

In the 1980s, Dilip Kumar’s controversial love affair with Asma, a Pakistani lady made headlines but they broke up after 2 years. After which Saira and Dilip give their marriage, a second chance (which they believe God’s gift) standing with each other when the world is gushing about the link-up.

Much in love, Saira said, “I am still head over heels in love with my Kohinoor, Yousuf Sahab, the way I was when I first felt attracted to him as a 12-year-old. Ours has been as good and enduring a marriage as so many marriages that have survived the ups and downs for four decades. No marriage is perfect. How can it be, when as human beings we are not perfect? It is mutual love, respect, and adoration that keep a marriage ticking.”

Even Dilip Sahab who is a man of few words never misses any chance to thank the love of his life, Saira, for standing by his side. The one who follows him on Twitter will know what we are talking about.

So it was a small gathering. Saab cut the cake few minutes ago. I guess all the flash irritated him big time. May Allah bless Dilip Saab with a longgggg and healthyyyyy life. -FF pic.twitter.com/bh5lsxhk86

Despite the age gap, controversies, and health issues, these actors always gush about each other just like any young lovers!

We wish, Dilip Kumar, a very healthy and happy birthday!