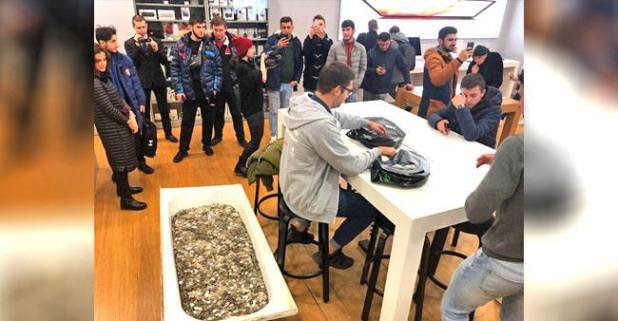 We live in the world of gadget and cravings for phones is something very common these days, well we came across many such people who do extraordinary stuff and one such man is a Russian folk who carried a bathtub full of coins to buy the new iPhone, yes you heard it right, a man went to buy the latest iPhone XS without cash and card, instead took a bathtub filled with coins till the top.

Apple spokeswoman, Lyudmila Semushina, told that the bathtub contained 100,000 Rubles, which was enough to buy a new iPhone XS, which sells between $1,050 to $1,500 in Russia. It took 2 hours for them to count the amount.

Lyudmila Semushina said, “What is it to be client orientated…It’s when a customer decides to do some hype and brings in a bathtub of change to buy an iPhone and the seller calmly and patiently sits down to count out the bath.

Even one Russian blogger Svyatoslav Kovalenko posts a video on Instagram, explaining how he managed to carry the heavy tub with 350kg of coins to the store. “At least two scuffles broke out with security guards before the group managed to carry the 350-kilogram bath into the store,” while Moscow Times reported, it was brought to the Evropeisky Mall in central Moscow.” Take a look at the video.

Meanwhile talking to the ABC news, the blogger Kovalenko, said, “We decided to do a very global experiment and show who refuses to accept change.” The more people who watch the video, the more people will understand that change, whether it’s a kopek, whether’s it 10 kopeks, it is also currency,” the man said, referring to a Russian coin worth less than a cent.”

Seems like the world is reaching another level and the craze for iPhone will never get lessen, are you the guy who wanna do some weird stuff in this world.