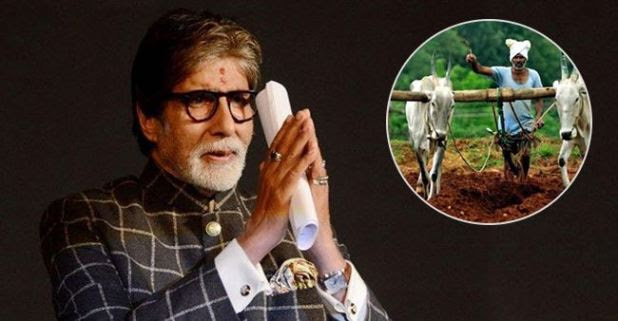 Amitabh Bachchan has once again done a great job as he pays off the debts of 1398 farmers of Uttar Pradesh. Every now and then he made sure that the farmers of his country live well and get well. On Monday, taking to his Twitter Official, Bachchan shared that he has also selected a few farmers to visit the superstar in Mumbai.

The 76-year-old actor said that he has personally arranged the traveling for 70 selected farmers to Mumbai and receive their bank letters.

This is why we call him a HERO , MAY GOD BLESS MY HERO @SrBachchan with LONG LONG LIFE ..

Earlier than this, Bachchan has shown his gratitude towards the Maharastra farmers by paying off the loans of 350 farmers. Mentioning the same, he wrote, “Gratitude leans across to the desire of removing some of the burdens that farmers continue to suffer from… It was Maharashtra first when over 350 farmers loans were taken care of… now it’s UP and 1398 of them that had outstanding of loans on banks has been done with an outlay of 4.05 crore.”

“And the inner peace it generates when the desired is completed,” he added.

Amitabh Ji is known for his good deeds of helping others. He has won the goodwill of so many distressed farmers taking away their worries and give them pure joy!

Recently, the actor wraps up his reality show Kaun Banega Crorepati season 10 with the shooting of the last episode. Sharing the happiness on his Twitter official, he wrote, “KBC Finale done .. end of this season .. its 10 seasons of KBC .. its 18 years of KBC from year 2000 .. its for me 716 episodes of KBC .. its 855 hours over 9 seasons .. additionally about 3-4 hours of work over each episode , & another 4-5 hours of prep on each episode”.

He was last seen in Thugs Of Hindostan as Azaad alongside Aamir Khan, Katrina Kaif and Fatima Sana Sheikh. The film did well at the box office but barely passed by the critics and the audience. He is now busy in the shooting of his upcoming film Brahmastra directed by Ayan Mukerji alongside Ranbir Kapoor, Alia Bhatt, and Mouni Roy.