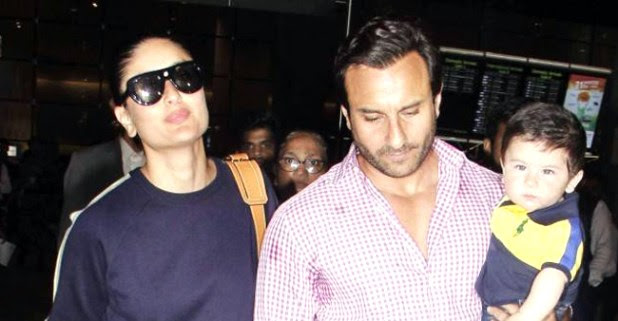 If you are wondering why national obsession Taimur Ali Khan aka Tim is not making headlines with his new pictures doing all the antics and expression. Here’s why Tim is away from the limelight from the last week.

According to the latest reports, Saif Ali Khan and Kareena Kapoor Khan have asked the paparazzi to stop chasing and clicking their chubby little nawab now because the 2 years old toddler is getting used to it and liking the attention every time he went out. The parents are worried about the constant gazing of media at Taimur but Saif seems all cool with the immense popularity of his son and make jokes of it.

Recently, Saif Ali Khan is busy promoting his latest flick in Bollywood and while it was going, Saif was asked about the scenario what if Taimur promotes the film. On this Saif in a light-hearted conversation said every film producer that he is working with wants his son Taimur to promote the movies. Saif also joked that Kareena asked him to not be so cheap and sell his son. But Saif further added that he is open to all nappy ads for Taimur.

Here is Daddy Saif’s statement, “Every producer I am working with is half-jokingly say, “Haha can we put him (for promotions)”.

With white in his hair (referring to his look from Baazaar). With Kaalakaandi, they wanted to put rubber bands. In hunter they want to put that Naga Sadhu wig on this poor guy. My wife (Kareena Kapoor Khan) says, “Don’t be so cheap. You can’t sell your son (Taimur). I am like, “Why not? Let’s sell him.”

“Seriously yaar, he is any way there on the internet. I am just using this platform to say if anybody has any good nappy ads or anything… at a very reasonable price…it’s not reasonable, it’s quite expensive actually. And, I won’t give him the money also. I’ll give him some cash for his education, I am already giving it to him. And I’ll spend the rest.”

Meanwhile, Saif’s co-star Chitrangda Singh from Baazaar was in splits when she heard all this while sitting next to him in the interview and interrupted him asking, “On what…” Saif said, “On holidays in Switzerland.”

Well, before the haters lose their minds on the social media about this and start criticizing him let us tell you Saif said this in a light-hearted way and he was joking.

Saif and Chitrangda’s starrer movie Baazaar is doing average at the box office with Rs 3.07 crore on its opening day. Also, garnered mix reviews from the critics as well as the audience.