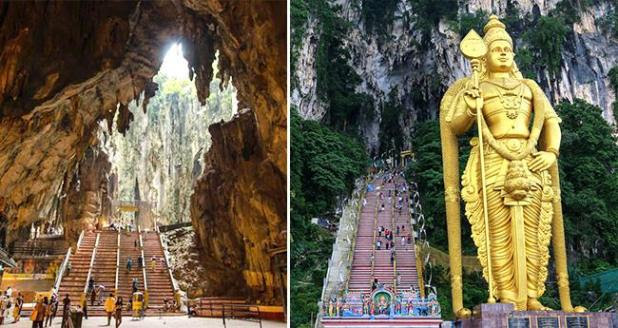 Kuala Lumpur, also known as KL is the largest city and the national capital of Malaysia, the South East Asian nation which has two regions, Peninsular Malaysia, south of Thailand, and East Malaysia on the island of Borneo.

Those who travel frequently or are wanderlusts will know we are talking about Kuala Lumpur’s famous tourist attraction Batu Caves which is a limestone or coral rag hill includes three major caves and a number of smaller ones. It is located approximately 11 kilometers to the north of Kuala Lumpur where the 100-year-old temple has idols and statues established inside the main caves and around it. The temple is said to be 400 million years old which is an important religious landmark by Hindus. Cathedral Cave, the largest and most popular cavern in Batu Caves has several Hindu shrines or temple beneath its 100-meter-high arched ceiling. At the foot of Batu Hill, there are two other cave temples – the Art Gallery Cave and Museum Cave where numerous Hindu statues and paintings can be seen. During the Hindu festival of Thaipusam, Batu Caves have thousands of devotees and visitors. It is celebrated at the end of January but the manifestation (yatra) begins on the evening before the Thaipusam Festival at the Sri Mariamman Temple in KL city center. Earlier in past, this festival attracted more than one million worshippers or tourists making it one of the largest gatherings in the world.

Worshippers came with many offerings to the Lord Muruga like containers of milk brightly decorated Kavadis (like garland but made steal and wood). The Kavadi is decorated with flowers and peacock feathers and some can weigh up to 100 kilos.

One of the amazing things happens which is a treat to watch when the travelers from all over the world head to stairs which has 272 steps.

Some followers believe that God fulfills their wish by having their bodies pierced by hooks, needles and even skewers which fascinates the visitors. Priests wait at the top to sprinkle holy ash over the hooks and skewers piercing the devotees’ flesh before they are removed.

Batu caves are opened daily from 6 am to 4 pm in the evening and to get there you can take Intrakota bus No 11D from the Central Market or the Cityliner bus No 69 at Jalan Pudu.