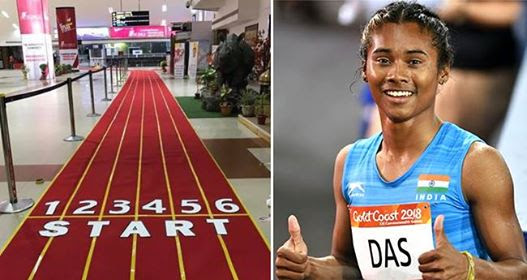 Hima Das is currently among the most talked about athletes in the country. She shot to fame in the 2018 IAAF World U20 Championships where she became the first Indian to win a gold medal at a world meet.

A grand welcome is waiting for #HimaDas at Guwahati Airport pic.twitter.com/4fUZFTV3wJ

Photos posted on Twitter show a carpet laid out for her at the Guwahati airport with track markings on it. This is the first time Hima is returning to the city since her sojourn to Jakarta for the Asian Games.

According to local media, Hima was welcomed by Assam Chief Minister Sarbananda Sonowal at the airport.

CM Shri @sarbanandsonwal received ace athlete @HimaDas8 at LGBI Airport, Guwahati and welcomed her home with a Gamosa. #HimaDas had a historic run at the recently concluded Asian Games in Jakarta, ending her campaign with 1

She will then head to Sarusujai Stadium and on the way, she will stop over at the Dr. Bhupen Hazarika Samadhi Kshetra Memorial. She will have a state-level felicitation at the Srimanta Sankaradev Kalakshetra in the evening.

Hima Das arrived in New Delhi along with the rest of the Indian contingent on Tuesday. She met Prime Minister Narendra Modi and Sports Minister Rajyavardhan Singh Rathore on Wednesday.

It has been a privilege to meet our honourable Prime Minister Shri Narendra Modi sir. Thank you sir for the encouragement and motivation during this meeting today. pic.twitter.com/OdETvS7mjq

Hima, too, seemed excited to return to Guwahati and took to social media to express the same.

At the recent Asian Games 2018, she set an Indian record when she clocked 51.00 to qualify for the 400 meter final in Jakarta. She then bettered that record by managing a time of 50.79 in the final to clinch silver. She won another silver in the mixed team 4x400m relay event before securing gold in the women’s 4x400m relay event.

Hima Das has surely made whole India proud and deserves all the rewards for the same.