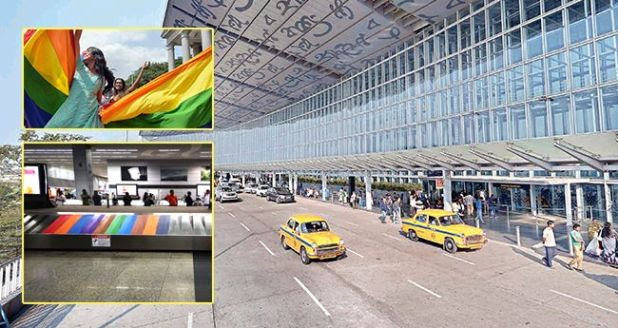 People in India are celebrating the historic verdict given on section 377. On September 6, the Supreme Court abolished Section 377 giving a fresh air to breathe to LGBT community. From Celebrities to Popular brands, all are expressing their joy over the verdict and are happy to see that love will triumph now no matter what the gender is!

Kolkata Airport celebrated by giving a colourful makeover to the conveyor belt at one of the baggage claims. A user posted the picture on Facebook and it is getting viral now. Have look:

Hello world! This is how the conveyor belt of Calcutta airport looks today. 06.09.2018Photograph by Debarshi Duttagupta

Google had celebrated by posting a cute GIF.

BJP MP Subramanian Swamy said on the verdict, “Ofcourse what happens in someone’s private life should not be of anyone’s concern,neither they should be punished. It is basically a genetic disorder, like someone having six fingers.Medical research must be done to rectify it.”

It is the American game. Soon there will be gay bars here where homosexuals can go. HIV will spread. So, after looking at the consequences I hope the next Govt will move a 7 judge bench to set aside this 5 judge bench order: Subramanian Swamy,BJP MP on #Section377 pic.twitter.com/htFxVXUlXz

Priyanka Chopra wrote on Twitter, “A supremely important judgement! “I am what I am so take me as I am,” says the Chief Justice of India as the Supreme Court decriminalises #Section377 in a unanimous vote from the bench. What a big win as a democracy and our fight for equal rights #ProudIndian #GoIndia”

A supremely important judgement! “I am what I am so take me as I am,” says the Chief Justice of India as the Supreme Court decriminalises #Section377 in a unanimous vote from the bench. What a big win as a democracy and our fight for equal rights #ProudIndian #GoIndia pic.twitter.com/S6PZY5hVZF

LGBTQ activist from Kerala, Aishwaryan said, “To be accepted by your own people for your preference is what I always had an issue with, but many factors are involved and we have a long way to go. If people from my generation and I are today celebrating this victory, it’s in remembering all those loved ones who are no longer here and wished to see this day. It’s just one hurdle that we have passed and many more to go. We deserve every equality to live the life we want to. Who is to decide who lives how? We are all equal, these are all basic human needs we are fighting to be accepted for.”

“The idea of conservative thoughts itself is so selfish, not only in our aspect, but in every way. The times that we are living in is very volatile and if not questioned now, then the future is not something that we all hoped to live and for our generations to come,” he added.