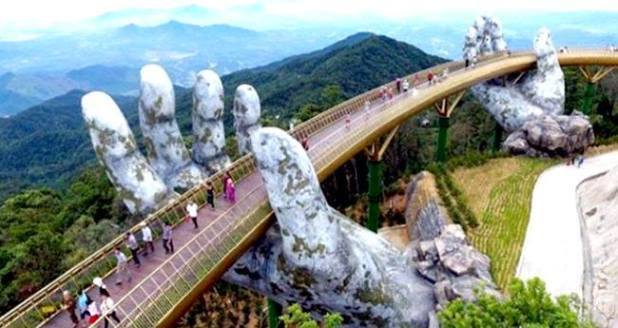 A new Bridge in Vietnam has caught everyone’s attention for its unique architecture and is also trending on social media’s moments. The Bridge name Cau Vang (meaning golden bridge), opened in June this year and became the most crowded tourist attraction place and people going crazy over it and clicking selfies and pictures on the bridge.

The bridge is golden in color but that’s not it yet as you will see the enormous structure of two hands looks like holding the bridge. It is situated near Na Dang, central Vietnam. It seems that Hands grew out of the hillside and its cradling in the hands. Like mother nature holds us.

It is surely on the people’s bucket list now. Cau Vang stands 150 meters long and you can also see Ba Na Hills (a holiday destination for French colonialists in the 20th century, but after they were kicked out by a Vietnamese revolution the area fell into disrepair.) It is set at 1,400 meters above sea level, it often sits above the cloud line which gives the feeling that the bridge is virtual in the clouds.

It is reported that the Lord of the Rings a TV series, which is expected to come out by 2021, is likely to be the most expensive ever, with an estimated ultimate cost of up to $1bn. Fans of Lord of the Rings got even more excited after Amazon’s enhance Netflix to bring the franchise to the small screen for a whopping $250m in 2017.

In June, Amazon executive Jennifer Salke said: “All of us would love a big, addictive show that is executed at the top of its game.

“We’re really excited about Lord of the Rings. Despite all the chatter about it, the deal just closed a month ago. We’ve been talking to writers. We have an estate that’s very active. I’ve spent three hours with Simon Tolkien. There’s a lot of moving parts with it. We’ll have some game plan to move forward with very soon.”

The bridge is made out of $2 billion investment project which hopes to turn Vietnam into an unmissable tourist destination.