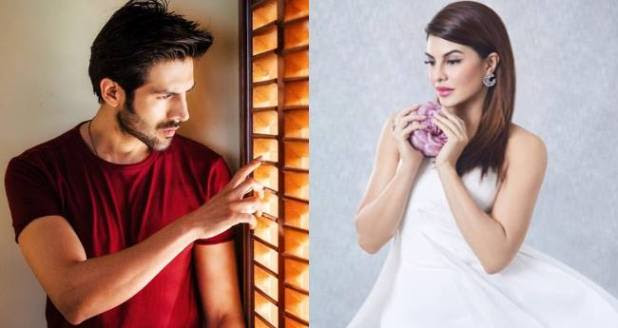 Kartik Aaryan is one of those actors who came and is now ruling Bollywood as well as audiences’ heart. In a very short period of time, Kartik became the favourites of many. He has given the best of his in the movies like Luv Ranjan’s Pyaar Ka Punchnama series and again with the same director Sonu Ke Titu Ki Sweety. The film is one of the blockbusters at the box office and was a critical success. The cherry on the top of his success is that he hosted the IIFA Awards 2018 in Bangkok. He took the place of actors in IIFA like Karan Johar, Saif Ali Khan, and Shahid Kapoor.

Recently, actress Jacqueline Fernandez left a comment on Kartik Aryan’s picture on his Instagram official in which the actor is looking drool-worthy. Without wasting any time Kartik replied to the actress with his win-win comment. Here’s what Jackie commented: “I see dead people” and Kartik hit back flirting with her and said, “Because you are drop dead gorgeous”. Take a look at Kartik’s picture:

Ain’t she, right? He is looking handsome!

Talking about Kartik’s work front, he is busy shooting Luka Chuppi, which is directed by Laxman Utekar alongside Kriti Sanon, Pankaj Tripathi, and Aparshakti Khurrana.

Producer Ajay Kapoor of Kyta Productions has joined hands with the Sonu Ke Titu Ki Sweety star for his next project. The film will be a remake of the super hit Kannada “Kirik Party” and the name of the movie is yet to be decided. “Kirik Party” was directed by Rishab Shetty and ran for over 150 days in cinemas. The theme of how friendship and love can turn a boy into a compassionate man. It is also reported that Jacqueline is also on board for this movie as a lead actress.

Meanwhile, Jacqueline Fernandez, who was vacationing in Italy recently, has grabbed Tarun Mansukhani’s Drive alongside Sushant Singh Rajput. She was last seen in Race 3 opposite Salman Khan, which performed phenomenally at the box office.