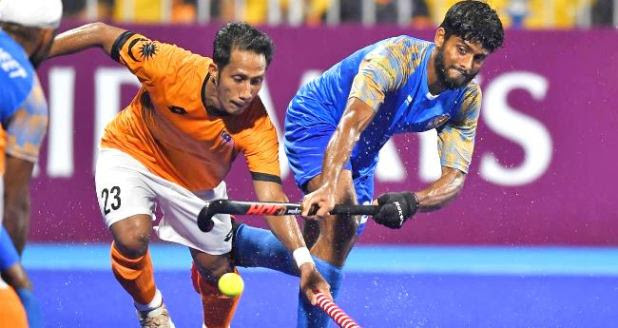 The Indian Men’s Hockey Team performed exceptionally well at the ongoing Asian Games 2018. After making a total of 76 goals in 5 matches at the group stage, the Indian team successfully reached the semi-finals to have a face-off against Malaysia. The match commenced at 4:00 PM (IST) in Jakarata. There was no goal from India and Malaysia till the half time. Surender Kumar got a green card for a foul.  India was two men less on the field in the final quarter.  However, India was leading with 2-1 till then. However, the penalty corner of lead to the score of 2-2 and the full-time whistled. The match moved to the penalty shoot-out. Firan Ahsari  scored the first goal for Malaysia while Akashdeep Singh took India’s second penalty stroke taking the score to 1-1. There was a no goal at the second and third penalty stroke for both the teams.  It was nail-biting match with the following strokes until India lost with 6-7.

India has played Malaysia 116 times and won 81 of those encounters while the Malaysians have won only 17. And is we talk about Asian Games specifically, the the two teams had a face-off for 11 times and India had never lost to Malaysia until the 2010 edition at Guangzhou.