Arjun Kapoor Makes Fun Of Alia Bhatt, She Asks Him To Get Lost 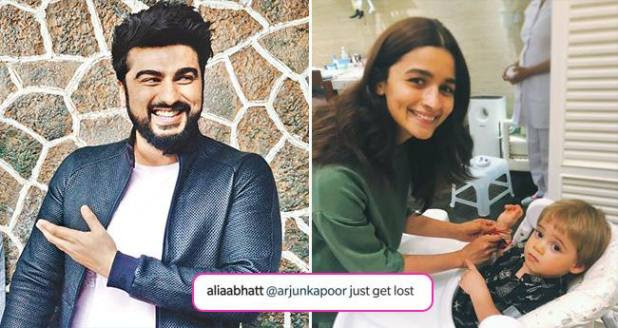 Bollywood actor Arjun Kapoor is known for making fun of his fellow stars from industry. He never shies away from making hilarious comments on their pictures on Instagram. We have often witnessed him taking a dig at Katrina Kaif who often gets pissed too. And this time, he targeted his 2 States co-star Alia Bhatt.

Alia Bhatt recently shared a picture on Raksha Bandhan in which we could see her tying rakhi on the wrist of Karan Johar’s son Yash. Sharing the picture, she wrote, “My beautiful baby brother!!! Aaaaah just look at that faceeeeee  #yashjohar”

Fans loved this picture as it got over 1.2 million likes.

However, Arjun Kapoor made a hilarious comment on it. He wrote, “Umm he’s not really that excited btw.”

To this Alia replied, “@arjunkapoor just get lost he’s playing it cool!”

Alia is very close to filmmaker Karan Johar and vice versa. She once said in an interview, “One person who I can talk to anything under the sun; be it personal, professional, philosophical and something that gives me a good and fun perspective in Karan Johar. Talking to him refreshes me to another level.”

Alia had done several films that are produced by Karan Johar. This includes- Humpty Sharma Ki Dulhania, Badrinath Ki Dulhania, Student Of The Year, Kapoor and Sons, and Raazi.

Alia will be next seen in Gully Boy opposite Ranveer Singh. She will also be seen in Kalank which also stars Madhuri Dixit, Sanjay Dutt, Sonakshi Sinha, and Varun Dhawan.