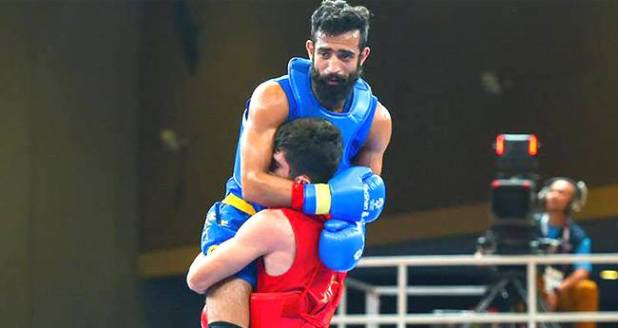 India’s pride and Athlete Surya Bhanu Partap Singh brought a Wushu (the Chinese martial arts) Bronze after losing his men’s Sanda-60kg semi-finals against  Iran’s Erfan Ahangarian at the Asian Games 2018. Even though India’s player Surya Bhanu got injured in the middle of the game, he won the bronze for India losing to his Iranian opponent with 2-0.

But Erfan is the one from Iran who won the hearts of many at the Asian Games by showing the sportsmanship when he carried injured Bhanu on off the ring. Everyone got so moved with his act of heartfulness and the commentators also admired him.

Here’s have a look at the video from the Asian Games yourself:

It’s very rare to see such kindful acts by the players and we are very happy with this moment at the Asian Games and it will be remembered as the act of sportsmanship for always.

In this years’ Asian Games, Indians are in full zest and enthusiasm as the players of all the games are playing exceptionally well and continuing to make our country proud. India stands at place 9 with 17 medals in its accounts. Indian athletes are at their best and even those young age player are doing exceptionally well.

On the day 5th of Asian Games 2018, 15 years old Shooter Shardul Vihan also stole the headlines by winning the silver medal in the men’s double trap event. Staying at the top two positions throughout the game he made a score of 141 in the finals.