Review: Happy Phirr Bhag Jayegi is a mixture of punjabi and chinese humour with outrageous comedy 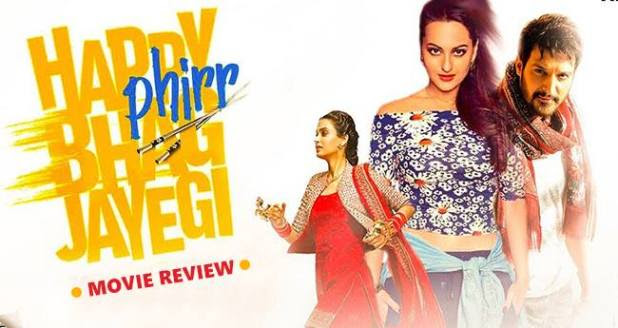 Here’s the summary of the story:

Both the Happy (Sonakshi and Diana) arrived in Shanghai, China for different works and alongside first Happy Ali Fazal aka Guddu in the movie also arrived who are now husband and wife in the second part of the movie. Some bad people who’ve come to nab Happy and her husband, pick up the wrong Happy, while Guddu and his wife Happy are escorted to a university to deliver a lecture.

Review: The sequel works with the same idea (Comedy of errors) and the theme of Happy Bhag Jayegi (HBJ). Those old tricks of caught up in extraordinary circumstances behaving like fools, Happy Phir Bhag Jayegi (HPBJ) is a fun film and a must watch at this weekend. The writing and direction by Mudassar Aziz is at their best with all the humour.

As soon as the film begins, both the Happys get interchanged and the fun starts from here. Second Happy (Sonakshi Sinha) is nabbed by a bunch of men who have hilarious names like Makaju (pronounced like a popular Hindi expletive). Diana Penty aka first Happy and her husband Guddu are escorted to a college, where a random Chinese man acting as their translator employs such chaste Hindi that it bamboozles the Punjabi couple. These random bits of humour set the tone for the rest of the film. Once the characters of Bagga (Jimmy Sheirgill), Usmaan Bhai (Piyush Mishra) and Khushi (Jassie Gill) get introduced, the film’s pace and humour pick up to a whole new level. But an extra word of appreciation for actors Denzil Smith and Jason Tham, who play the Chinese characters. Denzil plays Adnan Chau and Jason is Chan, the leader of the gangsters. Both actors performed really well in the scenes of outrageous comedy.

The writer and director Mudassar smartly managed to blend the Punjabi language in the Chinese territory and the outcome throughout the movie is hilarious. Every actor in the movie has done their roles to the perfection and the one who just made worth the watching is Jimmy Sheirgill with his comic timing.

If compare, HPBJ is as good as HBJ with average music which adds value to the storytelling process.

All in all the movie is full of humour and laughter with Punjabi and Chinese Tadka. The movie surely deserves 4 stars.