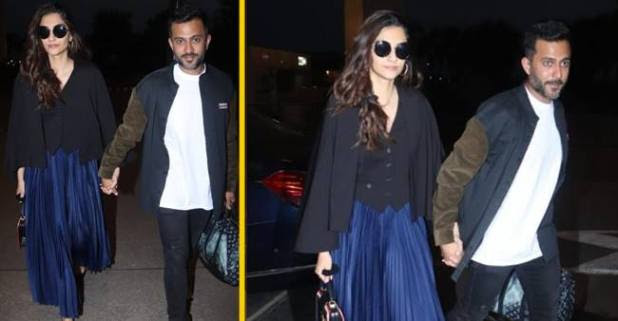 There are several Bollywood celebrities who often make their appearances at the airport and other public places while traveling to different locations. Prior to entering into the flights, they simply pose the paparazzi in their perfect outfits. The gorgeous Bollywood actress Sonam Kapoor recently spotted with her husband Anand Ahuja at Mumbai Airport on Thursday.

We can witness the couple walking hand in hand boasting their love at the airport. While walking in the airport, they held their hands and walked together. The same video went viral across the internet soon. From the picture, we can see Anand in a white tee with a navy blue-brown jacket and a pair of jeans while Sonam wore a black buttoned blouse paired with a pleated navy blue skirt. The actress put on a pair of sunglasses alongside black ballerinas.

The couple tied a knot with each other on 8th May 2018 in Mumbai. Their marriage took place in grand wedding celebrations with the star-studded occasion. Soon after their wedding, the actress started sharing her pictures with her hubby in a plethora of outfits. Recently, before flying off to New Delhi, Sonam Kapoor and Anand Ahuja were captured at the airport. Prior to heading into the airport, the couple waved to the photographer.

Speaking about the work front, Sonam K Ahuja was seen in her last film Ek Ladki Ko Dekha Toh Aisa Laga featuring her father Anil Kapoor and Rajkummar Rao. The actress is currently shooting for her next film The Zoya Factor directed by Abhishek Sharma. The film features Dulquer Salman and this movie is based on the book with the same title written by Anuja Chauhan. The filmmakers have planned to release this film on 14th June 2019.