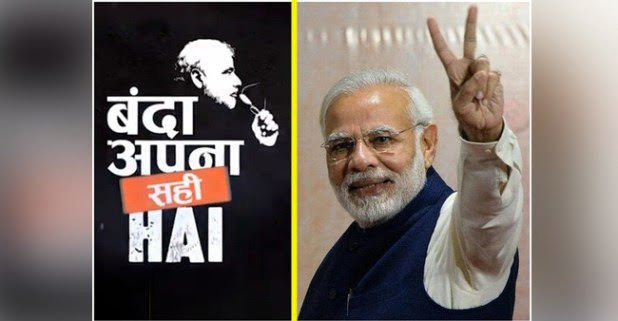 Everyone was happy including the family members of Pulwama martyred soldiers when our Indian Air Force (IAF) carried out major strikes at terror camps of Jaish-e-Mohammed in Balakot dropping 1,000kg bombs, which killed up to 350 terrorists, reportedly. On Tuesday morning, the whole nation got this good news which happened after 14 days of Pulwama unlawful happening.

The whole nation is proud of the Indian Air Force and hailed them for their precise decision. Meanwhile, people are appreciated and supporting PM Modi. Indians on social media recognition and backed Narendra Modi-drove BJP government. With regards to the state of mind, netizens have begun sharing a music video that was shared by the BJP before the Pulwama assault.

The video named ‘Banda Apna Sahi Hai’ inspired by the famous Bollywood tune ‘Apna Time Ayega’ from the Ranveer Singh-Alia Bhatt starrer ‘Gully Boy’ which released on February 14. In the shared video, a performer can be seen rapping about Modi and singing his gestures of recognition.

The 2.38-minutes-long video showcase the different stills and clasps of Modi in the previous five years. From Digital India and New India to the government’s work in providing electricity to villages, LPG connections, the song is all about various achievement by PM Modi.

Even though this song got released on Feb 13, the video has been becoming famous online again after IAF carried the air strike in Balakot, which is being viewed as India’s first retaliatory assault after Pulwama. The song also has dialogue from Vicky Kaushal-starrer ‘Uri The Surgical Strike’ -“How’s the Josh? High, sir”.

Shared by Vivek Agnihotri, this video is making noise all over the social media. Have a look at the tweets made by netizens:

The video was released by the BJP as part of its Lok Sabha 2019 election campaign.