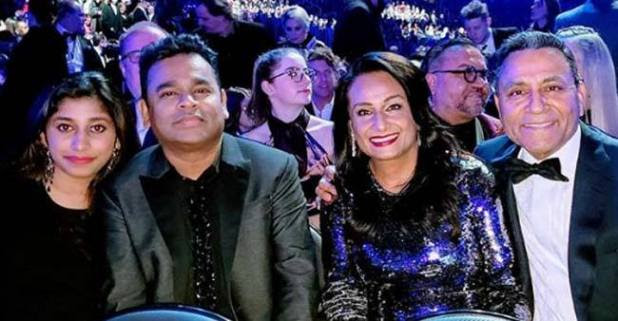 Grammy Awards, the grand musical event of the year was held at the Staples Center in LA, California. This was the 61st Annual Grammy Awards.

The big event is being hosted by Alicia Keys and the event was graced by popular names of the music world. Apart from singers, popular celebs have walked graciously on the red carpet. And from India, music maestro AR Rahman attended the ceremony along with his family.

The legendary Indian music composer and director took to his official social media handle and shared the inside photos of the event. We can see in the picture, he is looking handsome in the black shirt with a monochrome pantsuit of black color.

In one of his snaps, he shared a picture of his daughter Raheema Rahman and undoubtedly, she is looking elegant in the black attire.

Before going to the event, the pre-event look of the entire family was just camera worthy and AR took that picture sharing on his Instagram handle and wrote, “All set to go for Grammy Awards night.”

In the event, the song of the year with the highest vote was given to the song ‘This is America’. This song was sung by Donald Glover and written by the Childish Gambino and the best Rap song was given to Drake for God’s Plan.

While many other celebrities bagged the awards at the event. The Best Pop Solo Performance was awarded to John (When Do You Think You’re Going) Lady Gaga and the best pop vocal album was given to Ariana Grenade for Sweetener.