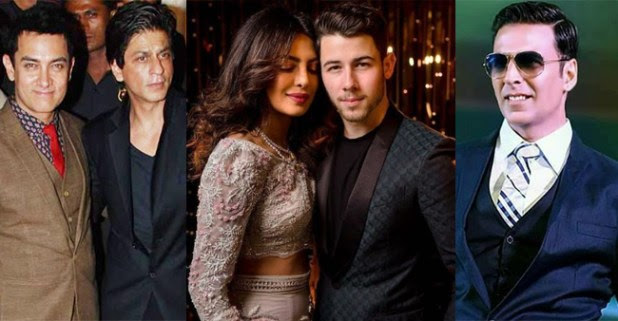 PeeCee and Nick Jonas tied the knot on December 1-2 in as per Hindu and Catholic rituals at The Taj Umaid Bhawan Palace in Jodhpur. The couple kept their wedding an intimate affair and only invited their close family friends. Even there was no Bollywood celeb seen in their wedding. Recently, the couple hosted a lavish reception bash in Mumbai. All the Bollywood biggies were invited to shower their wishes on the newlyweds.

Priyanka Chopra, for her third wedding reception, opted to arrive in a ravishing look. She wore a stunning two-piece covered in intricate beading with lace sleeves by Abu Jani and Sandeep. Whereas Nick looked stylish in his bottle green suit

A report suggests that Aamir Khan is in China for the promotion of his film, Thugs of Hindostan. Whereas Shah Rukh Khan is also busy with the promotional activities of Zero. Moreover, he had also hosted a special screening of Zero for his cast and crew at the house Mannat with his wife Gauri Khan that night. Speaking about Akshay Kumar, he has been spending some quality time with his son, Aarav who is here for the winter break. And about Ajay, we all know that he hardly attends any party and thus only wife Kajol attended the bash. Therefore these Bollywood known faces didn’t make it up to the Nickyanka’s reception.

Stay connected for the latest updates.