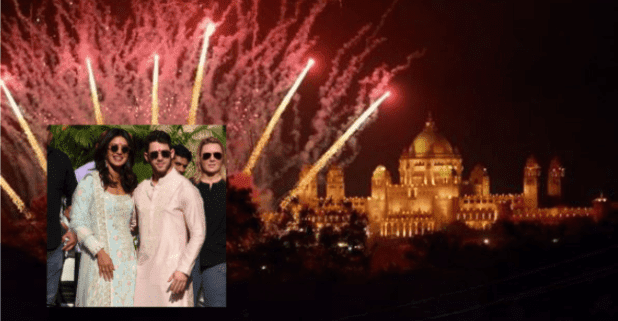 And another Bollywood couple Priyanka Chopra and Nick Jonas have entered the married club. The star jodi has solemnized their wedding as per Christian rituals at Jodhpur’s Umaid Bhawan Palace in the presence of their close family and friends.

Well, we haven’t got a single picture from Nick and Priyanka’s wedding ceremonies so far but presently, the beautiful fireworks which were done post their wedding reveals that the couple has finally got married.

A lot of videos from Umaid Bhawan which is all decked up for the wedding are doing the rounds of the social media.

Take a look at the videos and pictures here…

Nick’s brothers Joe and Kevin were his groomsmen including PeeCee’s brother Siddharth Chopra.

The wedding celebrations are not ending anytime soon for the newlyweds as the couple will take wedding vows again as per Hindu rituals (Punjabi style).

As per the reports, Umaid Bhawan was beautifully decorated with colorful lights and flowers as the couple walk down the aisle for the wedding.

The pre-wedding festivities had begun since yesterday which was again a private affair.

After two grand weddings in Jodhpur, newlyweds Priyanka Chopra and Nick Jonas will also host a grand reception in Delhi and Mumbai for their close friends and also for Bollywood friends. The reception will be attended by Bollywood celebrities who were uninvited for the wedding in Jodhpur.

Many congratulations to the couple and we just can’t wait to see the beautiful pictures.

Published by Harmisha Chauhan on 01 Dec 2018