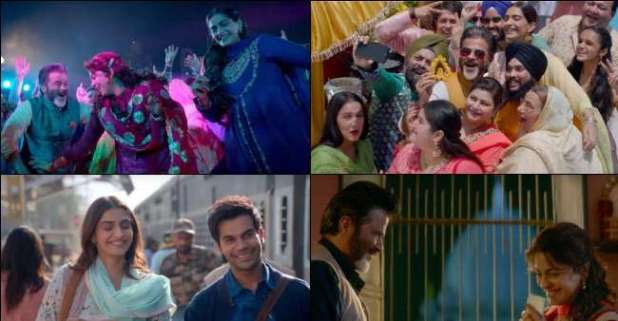 The much-awaited trailer of Ek Ladki Ko Dekha Toh Aisa Laga is finally out and has made fans quite happy. Sonam Kapoor and Rajkummar Rao are coming together for the first time onscreen. The movie is also pretty special as Sonam will be sharing the screen with her dad Anil Kapoor for the first time.

Ek Ladki Ko Dekha Toh Aisa Laga is a love story but a pretty unusual one. The film’s story is unusual but it’s definitely charming and will leave an impact.

The trailer starts about Sonam who is dreaming of having a wedding which is no less than a fairytale. She dreams of falling in love with someone who will be her prince charming. But as Sonam reaches an age where she is old enough to get married, her family decide to find a suitable partner for her. But they come to know that Rajkummar Rao is in love with her. Sonam’s brother thinks his friend will be a suitable match for her while their grandmother sought help from a matrimonial site.

Take a look at the trailer here…

Ek Ladki Ko Dekha Toh Aisa Laga film gives us one more reason to watch and its none other than actress Juhi Chawla whose brief appearance has left the audiences more excited. Anil and Juhi will be seen onscreen after a long time.

Ek Ladki Ko Dekha Toh Aisa Laga is directed by newbie director Shelly Chopra Dhar who is the sister of ace filmmaker Vidhu Vinod Chopra. The film has been produced by Vidhu Vinod Chopra in association with Fox Star Studios. The film is slated for st February 2019 release.

Published by Harmisha Chauhan on 27 Dec 2018