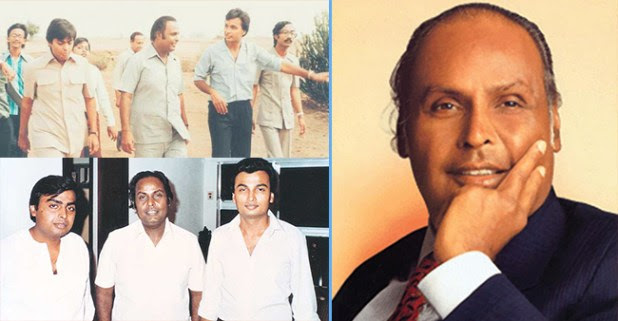 In the birth anniversary special segment we have none other than, Dhirajlal “Dhirubhai” Hirachand Ambani popularly known as Dhirubhai Ambani, was a big wheel of the business world. We remember the movie Guru, directed by filmmaker Mani Ratnam, showed the struggle of a man standing against all odds to make his mark in the Indian business world, do you know, it was inspired from Dhirubhai’s life. So today lets unfold his life in a shorter extent to get a glimpse over his life.

The great man was born on the 28th of December in 1932. His father, Hirachand Gordhandhas Ambani was one of the school teachers belonging to the Modh community. He grew with his elder brother, his mother Jamanaben started asking them to help their father at a very tender age, and said, “Begin earning some money,”.That made him pissed off and he said in Gujarati, “Phadia, phadia su karo chho, paisano to dhanglo karees.” (Why do you keep screaming for money? I’ll make heaps of money one day.).

Born in Chorwad, Gujarat, since childhood Ambani was curious to work as hard as possible. At the age of 17, he migrated to the British colony of Aden and in the beginning worked as a clerk at A. Besse & Co., which then was the largest transcontinental trading firm east of Suez.

He even worked in Yemen and then in the year 1958, he returned to India with Rs. 50,000/- and started a textile trading company, Majin, along with his cousin, Champaklal Damani.

In the year 1977, Dhirubhai started his first textile mill in Naroda, Ahmedabad. He named his brand as ‘Vimal’ which he named after his nephew, Vimal Ambani.

Dhirubhai also founded Reliance Industries in the same year 1977. His first office of the Reliance Commercial Corporation was started at the Narsinatha Street in Masjid Bunder. A room with a telephone, one table, and three chairs was the beginning fact of Reliance Industries.

The former Prime Minister of India, Atal Bihari Vajpayee once said, “The country has lost iconic proof of what an ordinary Indian fired by the spirit of enterprise and driven by determination can achieve in his own lifetime”.

In the year 2016, he was honored with the second highest civilian award, Padma Vibhushan. In the year 2000, a poll conducted by The Times of India voted him “Greatest Creator of Wealth in the Centuries”.