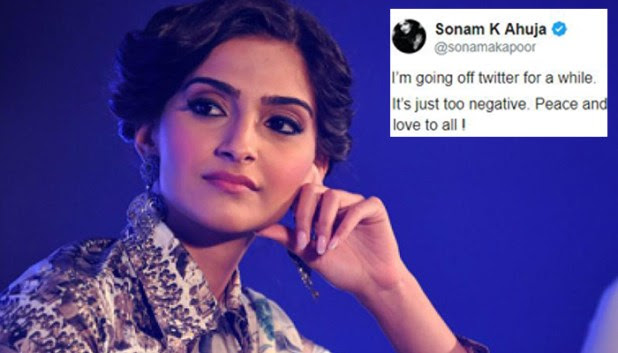 Sonam is considered a feminist voice in the male-dominated society. She supports for women rights. The actress did not clarify or gives more details about why she is taking a break but she mentioned that Twitter is not that good platform for her and doesn’t get any good vibes.

I’m going off twitter for a while. It’s just too negative. Peace and love to all !

Before signing out Sonam wished peace and love for all her fans. The actress has not mentioned anything specific incident which has forced her to leave Twitter.

Recently a man criticized the actress over her post in which she wrote and complained about the pollution in Mumbai. She posted ‘It’s taken me two hours to reach town. And I’m still  not at the destination. The roads are bad and the pollution is ridiculous it’s a nightmare to get out of the house.”

A man commented to the same that the pollution levels are rising, “because of people like you, who don’t use public transport or less fuel consumption vehicle. You  know that your luxury car gives 3 or 4 km per litre mileage  and 10 /20 AC’s in your house are equally responsible for global warming.First control your own pollution,’ he added

@sonamakapoor its because of people like you,who don’t use public transport or less fuel consumption vehicles.
You Know that your luxury car gives 3 or 4 km per litre mileage and 10 /20 AC’s in your house are equally responsible for global warming.
First control your pollution. pic.twitter.com/CrlGmKxv0b

Reacting to this Sonam replied the user, “And it’s because of men like you that women find it difficult to use public transport for the fear of being troubled.”

Maybe this was the reason which made Sonam take a break from Twitter. We hope that she comes back soon. Meanwhile Sonam Kapoor is busy with her upcoming film “The Zoya Factor”.