Bryan Adams to visit India for a concert, singers Harshdeep, Aditi Singh, among others to accompany him 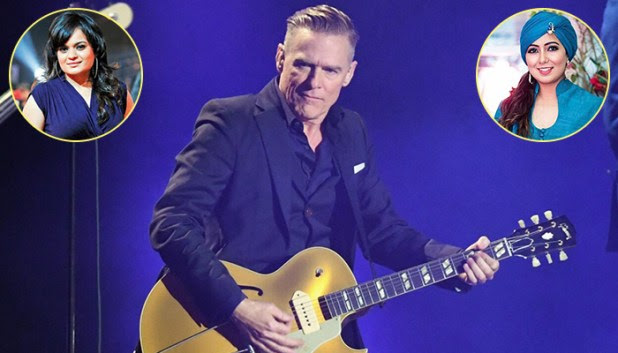 As per the latest reports, ace personality, Bryan Adams is all set to visit India to give power pack performances. The tour of well-known Canadian singer commences on with Ahmedabad, accompanied by Hyderabad on 11th October, 12th October in Mumbai and Bengaluru on 13th October.

The tour will come to an end on 14th October in the national capital.

The opening acts for the tour are queued up by Harshdeep Kaur, Aditi Singh Sharma, Abi Sampa and Syntyche Mongro.

Adams will be joined by ace singer Harshdeep in the cities including Mumbai and New Delhi, Aditi in the tech city of Bengaluru, Rushil Ranjan feat Abi Sampa in the city of Ahmedabad and Threeory Band in the city of Hyderabad as the authorized opening acts.

In a declaration, Shyam Tallamraju, Business Head, ENIL, stated, “The artiste and the management feel Harshdeep Kaur, Aditi Singh Sharma, Abi Sampa and Threeory Band would be the ideal fit as the opening acts since their music sensibilities are quite similar. There was a lot of back and forth on the opening acts before a final conclusion was taken.”

Both the superstars Aditi and Harshdeep are eager and gratified to have the big chance to sing with Adam.

Aditi stated that Summer of 69 vocalist’s work has had a massive impact on her profession.

“I’ve literally grown up listening to his music and covering his songs, with my very first band, way back in college. It is truly an honour to open for this musical legend. I can proudly cross one thing off my bucket list,” she said.

Harshdeep used to give a performance on Adam’s songs in school.

“Each song of his has a memory attached to it. I always wanted to watch him perform live but to share the same stage with him will be truly magical,” added the singer.

Adam has given many hits including Summer of 69, Please Forgive Me, Heaven and will be reaching India.