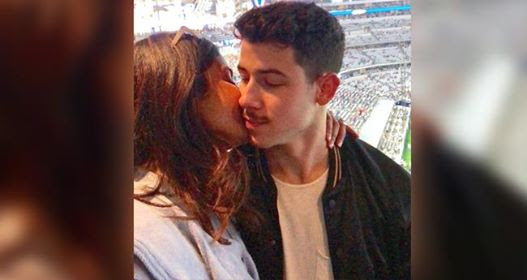 Priyanka Chopra gave her fiance, Nick Jonas a special kiss on his birthday today and posted an Instagram picture of the same.

They were seen kissing publically and a day after that, they were spotted kissing publicly for the first time ever. The newly engaged couple Priyanka Chopra and Nick Jonas celebrated his birthday at a football game in Texas. Priyanka wished her ‘baby’ on Instagram with a picture in which she can be seen affectionately kissing him.

Priyanka also posted three videos from the game on her Instagram story. She seemed amazed at the cheerleaders’ moves in the videos and wrote ‘woah!’ on one of them.

Nick and Priyanka were spotted showing some serious PDA at a stadium in Anaheim, California on Saturday, a day before Nick turned a year older. Priyanka, Nick and many of his friends and family, including brother Joe Jonas, had gathered for celebrations in California.

Priyanka also shared another pic of the group on her Instagram handle. They were seen playing cards and having a great time. For the festivities, Priyanka looked chic in a rust ensemble and tied her hair in a sophisticated updo to reveal her glowing skin, while Nick wore a casual grey tee.

Priyanka also shared a series of photos on her Instagram story, including a side shot of Nick beaming, with the caption, “Birthday weekend begins”.

Just a few days ago, the couple was spotted holding hands, snuggling up and laughing while having dinner with their friends Hollywood producer Brian Grazer, his wife Veronica Smiley Grazer and Priyanka’s manager Anjula Acharia at Malibu’s Nobu restaurant.

Priyanka and Nick made their engagement official on August 18 in Mumbai with a traditional Roka ceremony in which their families participated as well. It was held at her residence. Later, they posted pictures from the ceremony on their Instagram profiles and let the world know.

The pair has been dating since the month of May 2018. They met at the 2017 Met Gala. Dating rumours began swirling after Priyanka and the American singer arrived at the 2017 event together, both decked in Ralph Lauren.