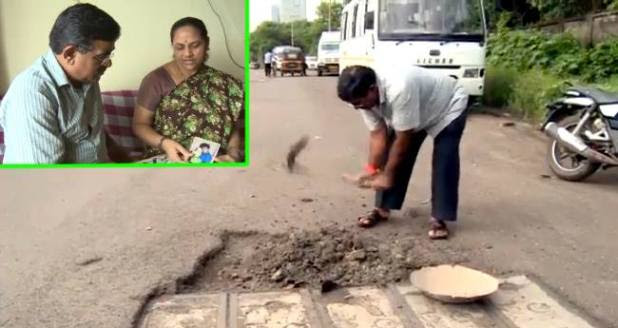 In July 2015, during the heavy rains in Mumbai, a boy named Prakash Bilhore was just 16-year-old when he lost his life. Its been three years now his family is still saddened by this that changed his mother-fathers life forever.

For the love of his son Prakash, his father Dadarao Bilhore fill the potholes on the roads make them smooth so that no one crashes with the potholes that took his son’s lives. Till now, Dadarao has filled more than 600 potholes in the city. 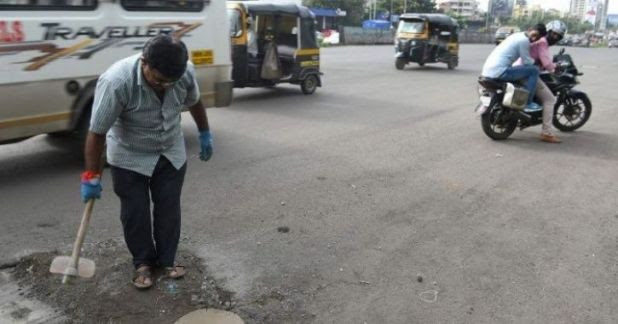 According to a leading daily, AFP, his son was sitting in the back seat of the motorcycle which hit a deep pothole, sending him flying off the vehicle. Also, Prakash who was not wearing a helmet suffered a fatal brain damage. His father said, “Prakash’s sudden passing away left a huge void in our lives. I do this work to remember and honour him.”

“I also don’t want anyone else to lose a loved one like we have,” Mr. Bilhore tells AFP at the modest apartment where he lives with his wife, daughter and extended family.

A leading daily, AFP shared a video on Twitter and wrote, “In tribute to his dead son, one of thousands lose their life due to potholes in India’s financial capital, Mumbai resident Dadarao Bilhore has filled in almost 600 potholes”

VIDEO: In tribute to his dead son, one of thousands killed in pothole accidents in India’s financial capital, Mumbai resident Dadarao Bilhore has filled in almost 600 potholes https://t.co/8p4Jw0zm03 pic.twitter.com/cWMahqOynR

Till now, we came across the daily news which we heard or read that potholes are very common taking lives of many people. The Government’s statistics show that potholes were responsible for the loss of lives of 3,597 people last year all over India which is an average of 10 per day.

A campaign is underway to have Mumbai featured in the Guinness Book of Records as the city with the most potholes, according to the indiatimes.com.

We salute Dadarao Bilhore for initiative, strength, and with such a spirit he is doing the whole work.