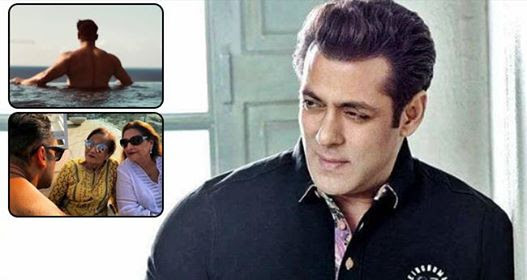 Salman Khan is currently in the beautiful country of Malta, shooting for his next film, Bharat. The cast and the crew of the film are chronicling the time there on their social media. And here is a rare update from Salman himself. Seems like the actor is enjoying his time in the foreign country.

In this newly posted picture, Salman can be seen in a swimming pool, SHIRTLESS. Well, it is not as clear of a picture as his fans would want to see. It’s a little blurry and Salman has his backed turned towards the camera. But nevertheless, it is going to make you want to make a splash in a pool. The view that the actor is enjoying from this infinity pool is gorgeous. What would we not do to be transported at that place right now? Well, nothing can be done except for enjoying the view through Salman’s picture.

Have a look at the image:

Bharat is being directed by Ali Abbas Zafar. The movie stars Tabu, Sunil Grover and Disha Patani in key roles. After Priyanka Chopra’s exit, Katrina Kaif entered as the lead heroine at the last minute. She is also in Malta, shooting for the film. And she is, as usual, posting on her social media about what’s happening.  Bharat is an official adaptation of the Korean film, An Ode to My Father.

When Katrina was asked about replacing Priyanka in the film, she had said, “It’s not like that. I don’t see it that way at all. Ali Abbas Zafar is very dear friend of mine. We have worked with each other earlier in ‘Mere Brother Ki Dulhan’ and ‘Tiger Zinda Hai’ and both films were extremely successful. More importantly, I had a great experience working on those two films. The roles which I have chosen for myself are purely based on the script and what my character is in that film. So for me, it is extremely exciting to be working with the team again. When this time Ali contacted me, he told me ‘Goldfish’… He calls me Goldfish… He said, ‘I am sending you a script and just react to it and tell me what you feel about it’. When I read the script, I thought it was an absolutely wonderful script and I felt extremely excited about the character which I am playing in the film. Therefore, I am very happy to be part of the film.”

Salman Khan has turned photographer on the sets of Bharat while shooting it in Malta. He clearly wants to make some memories while he is there in between his shootings. Atul Agnihotri is Salman Khan’s brother-in-law and he is also continuously updating us about the situations and moments there. He is uploading pictures from the sets and the place.

Have a look at the images:

What do you think?