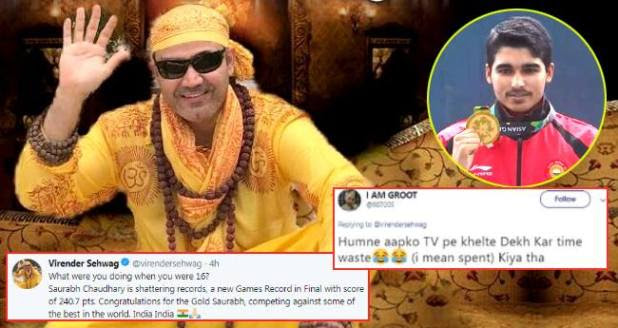 16-year-old Saurabh Chaudhary won Gold in 10m AP at Asian Games 2018. Apart from winning the Gold, he has also set Asian Games record scoring 240.7 in Men’s 10m Air Pistol medal event.  The interesting fact is that he is so young and had taken up shooting just 3 years ago.

Wishes started pouring in for the Young sportsperson for making the country proud. Former Cricketer Virendra Sehwag too took to Twitter to congratulate him and making a new record. However, people started giving hilarious replies on his tweet. This is because he had asked that what others are doing at this age when Saurabh is winning Gold for the country.

Sehwag wrote, “What were you doing when you were 16? Saurabh Chaudhary is shattering records, a new Games Record in Final with score of 240.7 pts. Congratulations for the Gold Saurabh, competing against some of the best in the world. India India”

What were you doing when you were 16?
Saurabh Chaudhary is shattering records, a new Games Record in Final with score of 240.7 pts. Congratulations for the Gold Saurabh, competing against some of the best in the world. India India

This tweet invited a lot of hilarious replies. Have a look:

Majority of the people said that they were busy scoring well in their school exams and were taking coaching. Well, it is almost all of us. Aren’t we?

Some praised Sehwag as well. Because our childhood went by watching Sachin Tendulkar and Sehwag doing wonders on pitch.

When I was 16 I was Watching @virendersehwag Smashing the Ball Hard & Out of The Park.

And then there were some Shaktiman Fans as well. (Ok, almost all of us watched it).

Who has the time to win Gold for the country when you can play counter strike?

And we were busy taking the toughest decision of our life- Choosing between Science and Commerce.

I was thinking. …should I take Science or not?

A user admitted that he did not make the best of his time in childhood and now life is playing games with him.

However, there were some inspiring replies as well. Not all people waste their childhood watching cartoons.

Was helping my family to get out of my father’s financial crises by taking tuitions..

I scored 97.1% in ICSE and was among the toppers of India in the boards. But sports has always been my passion and I am transitioning into sports entrepreneurship these days. Left my corporate job on June 30 of this year.

Well, tweeps know how to crack a joke in whatsoever the situation is.