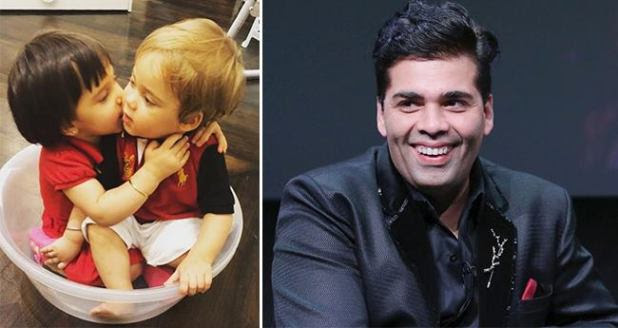 Karan Johar never fails to impress the fans on the social media when he shares pictures of his twins Yash Johar and Roohi Johar. The twins are munchkins and so cute. Karan Johar already shared many moments of Yash and Roohi with the fans from the day he welcomed them through surrogacy, last year. He announced it on social media with a statement. Since then Karan is enjoying parenting his lil girl and a boy. Karan’s Twitter bio reads, “Roohi aur Yash ka papa! Hiroo aur Yash ka beta….”

A few days back Karan took to his Instagram account and shared a candid picture of Yash and Roohi tucked in a small tub where Roohi is seen planting a kiss on her brother Yash’s cheek and he clicked this unmissable moment. He captioned it as, “Sibling love!!!!! #roohiyash”.Yash and Roohi wore a red tee looking aw adorable as seen in the picture.

Check out the picture:

Earlier a week ago, Karan had also shared a video of Yash and Roohi playing with Saif Ali Khan and Kareena Kapoor Khan’s son Taimur Ali Khan. The video instantly took the internet by storm and people couldn’t stop gushing about it.

Recently, under his home production banner Dharma, Johar released the movie Dhadak presenting Sridevi’s Daughter Janhvi Kapoor and Ishaan Khatter which also stars Ashutosh Rana as an antagonist. The movie is doing exceptionally good as for newcomers and till now the movie has earned over 50 crores in two weeks.