There isn’t a software company out there worth its salt that doesn’t have some kind of artificial intelligence initiative in progress right now. These organizations understand that AI is going to be a game-changer, even if they might not have a full understanding of how that’s going to work just yet.

In March at the Adobe Summit, I sat down with Adobe executive vice president and CTO Abhay Parasnis, and talked about a range of subjects with him including the company’s goal to build a cloud platform for the next decade — and how AI is a big part of that.

Parasnis told me that he has a broad set of responsibilities starting with the typical CTO role of setting the tone for the company’s technology strategy, but it doesn’t stop there by any means. He also is in charge of operational execution for the core cloud platform and all the engineering building out the platform — including AI and Sensei. That includes managing a multi-thousand person engineering team. Finally, he’s in charge of all the digital infrastructure and the IT organization — just a bit on his plate.

Ten years down the road

The company’s transition from selling boxed software to a subscription-based cloud company began in 2013, long before Parasnis came on board. It has been a highly successful one, but Adobe knew it would take more than simply shedding boxed software to survive long-term. When Parasnis arrived, the next step was to rearchitect the base platform in a way that was flexible enough to last for at least a decade — yes, a decade.

“When we first started thinking about the next generation platform, we had to think about what do we want to build for. It’s a massive lift and we have to architect to last a decade,” he said. There’s a huge challenge because so much can change over time, especially right now when technology is shifting so rapidly.

That meant that they had to build in flexibility to allow for these kinds of changes over time, maybe even ones they can’t anticipate just yet. The company certainly sees immersive technology like AR and VR, as well as voice as something they need to start thinking about as a future bet — and their base platform had to be adaptable enough to support that.

Making Sensei of it all

But Adobe also needed to get its ducks in a row around AI. That’s why around 18 months ago, the company made another strategic decision to develop AI as a core part of the new  platform. They saw a lot of companies looking at a more general AI for developers, but they had a different vision, one tightly focussed on Adobe’s core functionality. Parasnis sees this as the key part of the company’s cloud platform strategy. “AI will be the single most transformational force in technology,” he said, adding that Sensei is by far the thing he is spending the most time on.” 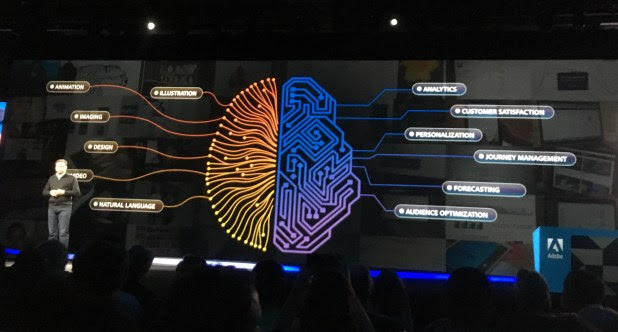 The company began thinking about the new cloud platform with the larger artificial intelligence goal in mind, building AI-fueled algorithms to handle core platform functionality. Once they refined them for use in-house, the next step was to open up these algorithms to third-party developers to build their own applications using Adobe’s AI tools.

It’s actually a classic software platform play, whether the service involves AI or not. Every cloud company from Box to Salesforce has been exposing their services for years, letting developers take advantage of their expertise so they can concentrate on their core knowledge. They don’t have to worry about building something like storage or security from scratch because they can grab those features from a platform that has built-in expertise  and provides a way to easily incorporate it into applications.

The difference here is that it involves Adobe’s core functions, so it may be intelligent auto cropping and smart tagging in Adobe Experience Manager or AI-fueled visual stock search in Creative Cloud. These are features that are essential to the Adobe software experience, which the company is packaging as an API and delivering to developers to use in their own software.

Whether or not Sensei can be the technology that drives the Adobe cloud platform for the next 10 years, Parasnis and the company at large are very much committed to that vision. We should see more announcements from Adobe in the coming months and years as they build more AI-powered algorithms into the platform and expose them to developers for use in their own software.

Parasnis certainly recognizes this as an ongoing process. “We still have a lot of work to do, but we are off in an extremely good architectural direction, and AI will be a crucial part,” he said.