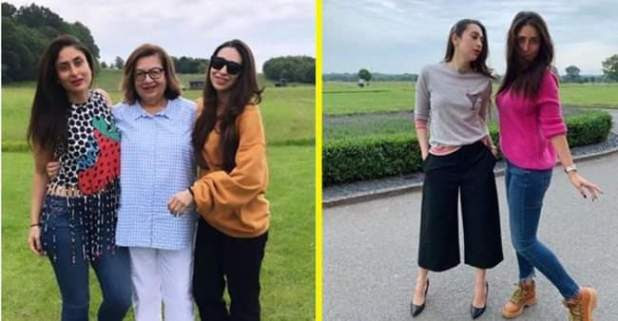 The UK vacation of Kareena Kapoor is still on. On Monday, the actress spent another chilled out day with her sister Karisma Kapoor. Their mother, the veteran actor Babita, also joined them.

On Instagram, Karisma shared pictures with her sister and mother on Monday. She captioned a picture – “#chill”,  that featured her and Kareena as they struck stylish poses in what appears to be the English countryside. Kareena is seen in a fluffy pink sweater, blue jeans and brown boots while Karisma is seen in a grey sweater, black pants and black heels. Amrita Arora, their friend and actor commented on the picture, calling them her ‘favs’.

The diva, Karisma shared another picture on her Instagram stories featuring the sisters and their mum and wrote- “Like mother like daughters”, alongside the picture. Karisma is seen in a mustard oversized jacket, black pants and white sneakers and Kareena is seen in a black-and-white top with fringes at the bottom and mother, Babita is seen in a blue and white plaid shirt, white pants and white shoes. The geotag of the location shared by Karisma was Dogmersfield, a small village in Hampshire, England.

The Sunday night was spent partying with friends by Kareena, Karisma and Saif Ali Khan in London. On the same day, Karisma uploaded an Instagram story featuring her along with Saif and Kareena and wrote, “Family”. She is seen with Kareena in another picture and they are dressed in black ensembles.

On the work front, Kareena recently finished shooting for Good News, co-starring Akshay Kumar, Kiara Advani and Diljit Dosanjh. She is also working on Angrezi Medium with Irrfan Khan and will also be seen opposite Aamir Khan in Laal Singh Chaddha. Apart from the films, she is now also a judge on dance reality show Dance India Dance.